Year of the Big Thaw 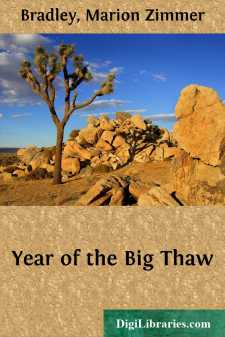 You say that Matthew is your own son, Mr. Emmett?

Yes, Rev'rend Doane, and a better boy never stepped, if I do say it as shouldn't. I've trusted him to drive team for me since he was eleven, and you can't say more than that for a farm boy. Way back when he was a little shaver so high, when the war came on, he was bounden he was going to sail with this Admiral Farragut. You know boys that age—like runaway colts. I couldn't see no good in his being cabin boy on some tarnation Navy ship and I told him so. If he'd wanted to sail out on a whaling ship, I 'low I'd have let him go. But Marthy—that's the boy's Ma—took on so that Matt stayed home. Yes, he's a good boy and a good son.

We'll miss him a powerful lot if he gets this scholarship thing. But I 'low it'll be good for the boy to get some learnin' besides what he gets in the school here. It's right kind of you, Rev'rend, to look over this application thing for me.

Well, if he is your own son, Mr. Emmett, why did you write 'birthplace unknown' on the line here?

Rev'rend Doane, I'm glad you asked me that question. I've been turnin' it over in my mind and I've jest about come to the conclusion it wouldn't be nohow fair to hold it back. I didn't lie when I said Matt was my son, because he's been a good son to me and Marthy. But I'm not his Pa and Marthy ain't his Ma, so could be I stretched the truth jest a mite. Rev'rend Doane, it's a tarnal funny yarn but I'll walk into the meetin' house and swear to it on a stack o'Bibles as thick as a cord of wood.

You know I've been farming the old Corning place these past seven year? It's good flat Connecticut bottom-land, but it isn't like our land up in Hampshire where I was born and raised. My Pa called it the Hampshire Grants and all that was King's land when his Pa came in there and started farming at the foot of Scuttock Mountain. That's Injun for fires, folks say, because the Injuns used to build fires up there in the spring for some of their heathen doodads. Anyhow, up there in the mountains we see a tarnal power of quare things.

You call to mind the year we had the big thaw, about twelve years before the war? You mind the blizzard that year? I heard tell it spread down most to York. And at Fort Orange, the place they call Albany now, the Hudson froze right over, so they say. But those York folks do a sight of exaggerating, I'm told.

Anyhow, when the ice went out there was an almighty good thaw all over, and when the snow run off Scuttock mountain there was a good-sized hunk of farmland in our valley went under water. The crick on my farm flowed over the bank and there was a foot of water in the cowshed, and down in the swimmin' hole in the back pasture wasn't nothing but a big gully fifty foot and more across, rushing through the pasture, deep as a lake and brown as the old cow. You know freshet-floods? Full up with sticks and stones and old dead trees and somebody's old shed floatin' down the middle. And I swear to goodness, Parson, that stream was running along so fast I saw four-inch cobblestones floating and bumping along....