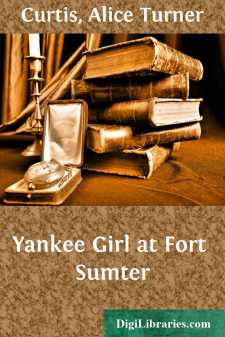 "Your name is in a song, isn't it?" said Grace Waite, as she and her new playmate, Sylvia Fulton, walked down the pleasant street on their way to school.

"Is it? Can you sing the song?" questioned Sylvia eagerly, her blue eyes shining at what promised to be such a delightful discovery.

Grace nodded smilingly. She was a year older than Sylvia, nearly eleven years old, and felt that it was quite proper that she should be able to explain to Sylvia more about her name than Sylvia knew herself.

"It is something about 'spelling,'" she explained, and then sang, very softly:

"I suppose it means she was the best speller," Grace said soberly.

"I think it is a lovely song," said Sylvia. "I'll tell my mother about it. I am so glad you told me, Grace."

Sylvia Fulton was ten years old, and had lived in Charleston, South Carolina, for the past year. Before that the Fultons had lived in Boston. Grace Waite lived in the house next to the one which Mr. Fulton had hired in the beautiful southern city, and the two little girls had become fast friends. They both attended Miss Patten's school. Usually Grace's black mammy, Esther, escorted them to and from Miss Patten's, but on this morning in early October they were allowed to go by themselves.

As they walked along they could look out across the blue harbor, and see sailing vessels and rowboats coming and going. In the distance were the three forts whose historic names were known to every child in Charleston. Grace never failed to point them out to the little northern girl, and to repeat their names:

"Castle Pinckney," she would say, pointing to the one nearest the city, and then to the long dark forts at the mouth of the harbor, "Fort Sumter, and Fort Moultrie."

"Don't stop to tell me the names of those old forts this morning," said Sylvia. "I know just as much about them now as you do. We shall be late if we don't hurry."

Miss Patten's house stood in a big garden which ran nearly to the water's edge. The schoolroom opened on each side to broad piazzas, and there was always the pleasant fragrance of flowers in the big airy room. Sylvia was sure that no one could be more beautiful than Miss Patten. "She looks just like one of the ladies in your 'Godey's Magazine,' "she had told her mother, on returning home from her first day at school.

And with her pretty soft black curls, her rosy cheeks and pleasant voice, no one could imagine a more desirable teacher than Miss Rosalie Pattten. There were just twelve little girls in her school. There were never ten, or fourteen. Miss Patten would never engage to take more than twelve pupils; and the twelve always came. Mrs. Waite, Grace's mother, had told Mrs. Fulton that Sylvia was very fortunate to attend the school.

School had opened the previous week, and Sylvia had begun to feel quite at home with her new schoolmates....