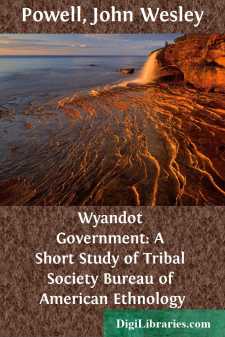 In the social organization of the Wyandots four groups are recognized—the family, the gens, the phratry, and the tribe.

The family, as the term is here used, is nearly synonymous with the household. It is composed of the persons who occupy one lodge, or, in their permanent wigwams, one section of a communal dwelling. These permanent dwellings are constructed in an oblong form, of poles interwoven with bark. The fire is placed in line along the center, and is usually built for two families, one occupying the place on each side of the fire.

The head of the family is a woman.

The gens is an organized body of consanguineal kindred in the female line. “The woman carries the gens,” is the formulated statement by which a Wyandot expresses the idea that descent is in the female line. Each gens has the name of some animal, the ancient of such animal being its tutelar god. Up to the time that the tribe left Ohio, eleven gentes were recognized, as follows:

There is a body of names belonging to each gens, so that each person’s name indicates the gens to which he belongs. These names are derived from the characteristics, habits, attitudes, or mythologic stories connected with, the tutelar god.

The following schedule presents the name of a man and a woman in each gens, as illustrating this statement:

There are four phratries in the tribe, the three gentes Bear, Deer, and Striped Turtle constituting the first; the Highland Turtle, Black Turtle, and Smooth Large Turtle the second; the Hawk, Beaver, and Wolf the third, and the Sea Snake and Porcupine the fourth.

This unit in their organization has a mythologic basis, and is chiefly used for religious purposes, in the preparation of medicines, and in festivals and games....