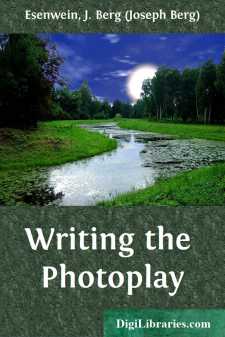 CHAPTER I WHAT IS A PHOTOPLAY?

As its title indicates, this book aims to teach the theory and practice of photoplay construction. This we shall attempt by first pointing out its component parts, and then showing how these parts are both constructed and assembled so as to form a strong, well-built, attractive and salable manuscript.

The Photoplay Defined and Differentiated

A photoplay is a story told largely in pantomime by players, whose words are suggested by their actions, assisted by certain descriptive words thrown on the screen, and the whole produced by a moving-picture machine.

It should be no more necessary to say that not all moving-picture productions are photoplays than that not all prose is fiction, yet the distinction must be emphasized. A photoplay is to the program of a moving-picture theatre just what a short-story is to the contents of a popular magazine—it supplies the story-telling or drama element. A few years ago the managers of certain theatres used so to arrange their programs that for four or five days out of every week the pictures they showed would consist entirely of photoplays. On such days their programs corresponded exactly to the contents-page of an all-fiction magazine—being made up solely to provide entertainment. The all-fiction magazine contains no essays, critical papers, or special articles, for the instruction of the reader, beyond the information and instruction conveyed to him while interestedly perusing the stories. Just so, the all-photoplay program in a picture theatre, at the time of which we speak, was one made up entirely of either "dramatic" or "comedy" subjects. Films classified as "scenic," "educational," "vocational," "industrial," "sporting," and "topical," were not included in such a program.

True, a genuine photoplay may contain scenes and incidents which would almost seem to justify its being included in one of the foregoing classes. One might ask, for instance, why Selig's film, "On the Trail of the Germs," produced about five years ago, was classified as "educational," while Edison's "The Red Cross Seal" and "The Awakening of John Bond" (both of which were produced at the instance of the National Association for the Study and Prevention of Tuberculosis, and had to do with the fight waged by that society against the disease in the cities), were listed as "dramatic" films or photoplays. Anyone who saw all three of the films, however, would recognize that the Selig picture, while in every respect a subject of great human interest, was strictly educational, and employed the thread of a story not as a dramatic entertainment, but merely to furnish a connecting link for the scenes which illustrated the methods of curing the disease after a patient is discovered to be infected. The Edison pictures, on the other hand, were real dramas, with well-constructed plots and abundant dramatic interest, even while, as the advertising in the trade papers announced, the principal object of the pictures was "to disseminate information as to what becomes of the money that is received from the sale of Red Cross stamps at holiday time." So we see that the distinction lies in the amount of plot or story-thread which each carries, and that a mere series of connected pictures without a plot running through it obviously cannot be called a photoplay any more than a series of tableaus on the stage could be accurately called a play.

Therefore, learn to think of a photoplay as being a story prepared for pantomimic development before the camera; a story told in action, with inserted descriptive matter where the thought might be obscure without its help; a story told in one or more reels, each reel containing from twenty-five to fifty scenes.

The spectator at a photoplay entertainment must be able promptly and easily to discover who your characters are, what kind of people they are, what they plan to do, how they succeed or fail, and, in fact, must "get" the whole story entirely from what he sees the actors in the picture do, with the slight assistance of a few explanatory leaders, or sub-titles, and, perhaps, such inserts as a letter, a newspaper cutting, a telegram, or some such device, flashed for a moment on the screen....