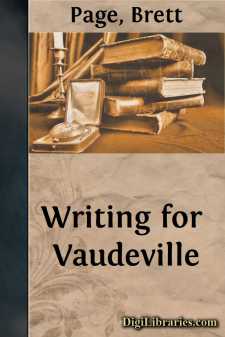 CHAPTER I THE WHY OF THE VAUDEVILLE ACT

1. The Rise of Vaudeville

A French workman who lived in the Valley of the Vire in the fourteenth or fifteenth century, is said to be vaudeville's grandparent. Of course, the child of his brain bears not even a remote resemblance to its descendant of to-day, yet the line is unbroken and the relationship clearer than many of the family trees of the royal houses. The French workman's name was Oliver Bassel, or Olivier Basselin, and in his way he was a poet. He composed and sang certain sprightly songs which struck the popular fancy and achieved a reputation not only in his own town but throughout the country.

Bassel's success raised the usual crop of imitators and soon a whole family of songs like his were being whistled in France. In the course of time these came to be classed as a new and distinct form of musical entertainment. They were given the name of "Val-de-Vire" from the valley in which Bassel was born. This name became corrupted, into "vaux-de-vire" in the time of Louis XVI, and was applied to all the popular or topical songs sung on the streets of Paris. Then the aristocrats took up these songs and gave entertainments at their country seats. To these entertainments they gave the name of "vaux-de-ville," the last syllable being changed to honor Bassel's native town [1] And gradually the x was dropped and the word has remained through the years as it is to-day.

[1] Another version relates that these songs were sung on the Pont Neuf in Paris, where stands the Hotel de Ville, or City Hall, and thus the generic name acquired the different termination.

As the form of entertainment advanced, the word vaudeville expanded in meaning. It came to comprise not only a collection of songs, but also acrobatic feats and other exhibitions. Having no dramatic sequence whatever, these unrelated acts when shown together achieved recognition as a distinct form of theatrical entertainment. As "vaudeville"—or "variety"—this form of entertainment became known and loved in every country of the world.

Vaudeville was introduced into this country before 1820, but it did not become a common form of entertainment until shortly before the Civil War when the word 'variety' was at once adopted and became familiar as something peculiarly applicable to the troubled times. The new and always cheerful entertainment found the reward of its optimism in a wide popularity. But as those days of war were the days of men, vaudeville made its appeal to men only. And then the war-clouds passed away and the show business had to reestablish itself, precisely as every other commercial pursuit had to readjust itself to changed conditions.

Tony Pastor saw his opportunity. On July 31, 1865, he opened "Tony Pastor's Opera House" at 199-201 Bowery, New York. He had a theory that a vaudeville entertainment from which every objectionable word and action were taken away, and from which the drinking bar was excluded, would appeal to women and children as well as men....