Wreck of the Golden Mary 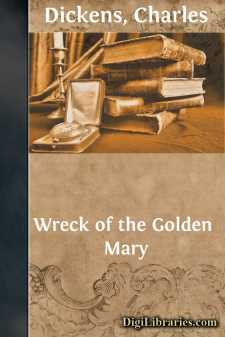 I was apprenticed to the Sea when I was twelve years old, and I have encountered a great deal of rough weather, both literal and metaphorical.  It has always been my opinion since I first possessed such a thing as an opinion, that the man who knows only one subject is next tiresome to the man who knows no subject.  Therefore, in the course of my life I have taught myself whatever I could, and although I am not an educated man, I am able, I am thankful to say, to have an intelligent interest in most things.

A person might suppose, from reading the above, that I am in the habit of holding forth about number one.  That is not the case.  Just as if I was to come into a room among strangers, and must either be introduced or introduce myself, so I have taken the liberty of passing these few remarks, simply and plainly that it may be known who and what I am.  I will add no more of the sort than that my name is William George Ravender, that I was born at Penrith half a year after my own father was drowned, and that I am on the second day of this present blessed Christmas week of one thousand eight hundred and fifty-six, fifty-six years of age.

When the rumour first went flying up and down that there was gold in California—which, as most people know, was before it was discovered in the British colony of Australia—I was in the West Indies, trading among the Islands.  Being in command and likewise part-owner of a smart schooner, I had my work cut out for me, and I was doing it.  Consequently, gold in California was no business of mine.

But, by the time when I came home to England again, the thing was as clear as your hand held up before you at noon-day.  There was Californian gold in the museums and in the goldsmiths’ shops, and the very first time I went upon ’Change, I met a friend of mine (a seafaring man like myself), with a Californian nugget hanging to his watch-chain.  I handled it.  It was as like a peeled walnut with bits unevenly broken off here and there, and then electrotyped all over, as ever I saw anything in my life.

I am a single man (she was too good for this world and for me, and she died six weeks before our marriage-day), so when I am ashore, I live in my house at Poplar.  My house at Poplar is taken care of and kept ship-shape by an old lady who was my mother’s maid before I was born.  She is as handsome and as upright as any old lady in the world.  She is as fond of me as if she had ever had an only son, and I was he.  Well do I know wherever I sail that she never lays down her head at night without having said, “Merciful Lord! bless and preserve William George Ravender, and send him safe home, through Christ our Saviour!”  I have thought of it in many a dangerous moment, when it has done me no harm, I am sure.

In my house at Poplar, along with this old lady, I lived quiet for best part of a year: having had a long spell of it among the Islands, and having (which was very uncommon in me) taken the fever rather badly.  At last, being strong and hearty, and having read every book I could lay hold of, right out, I was walking down Leadenhall Street in the City of London, thinking of turning-to again, when I met what I call Smithick and Watersby of Liverpool.  I chanced to lift up my eyes from looking in at a ship’s chronometer in a window, and I saw him bearing down upon me, head on....