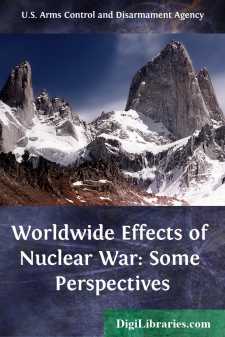 Much research has been devoted to the effects of nuclear weapons. But studies have been concerned for the most part with those immediate consequences which would be suffered by a country that was the direct target of nuclear attack. Relatively few studies have examined the worldwide, long term effects.

Realistic and responsible arms control policy calls for our knowing more about these wider effects and for making this knowledge available to the public. To learn more about them, the Arms Control and Disarmament Agency (ACDA) has initiated a number of projects, including a National Academy of Sciences study, requested in April 1974. The Academy's study, Long-Term Worldwide Effects of Multiple Nuclear Weapons Detonations, a highly technical document of more than 200 pages, is now available. The present brief publication seeks to include its essential findings, along with the results of related studies of this Agency, and to provide as well the basic background facts necessary for informed perspectives on the issue.

New discoveries have been made, yet much uncertainty inevitably persists. Our knowledge of nuclear warfare rests largely on theory and hypothesis, fortunately untested by the usual processes of trial and error; the paramount goal of statesmanship is that we should never learn from the experience of nuclear war.

The uncertainties that remain are of such magnitude that of themselves they must serve as a further deterrent to the use of nuclear weapons. At the same time, knowledge, even fragmentary knowledge, of the broader effects of nuclear weapons underlines the extreme difficulty that strategic planners of any nation would face in attempting to predict the results of a nuclear war. Uncertainty is one of the major conclusions in our studies, as the haphazard and unpredicted derivation of many of our discoveries emphasizes. Moreover, it now appears that a massive attack with many large-scale nuclear detonations could cause such widespread and long-lasting environmental damage that the aggressor country might suffer serious physiological, economic, and environmental effects even without a nuclear response by the country attacked.

An effort has been made to present this paper in language that does not require a scientific background on the part of the reader. Nevertheless it must deal in schematized processes, abstractions, and statistical generalizations. Hence one supremely important perspective must be largely supplied by the reader: the human perspective--the meaning of these physical effects for individual human beings and for the fabric of civilized life.

It has now been two decades since the introduction of thermonuclear fusion weapons into the military inventories of the great powers, and more than a decade since the United States, Great Britain, and the Soviet Union ceased to test nuclear weapons in the atmosphere. Today our understanding of the technology of thermonuclear weapons seems highly advanced, but our knowledge of the physical and biological consequences of nuclear war is continuously evolving....