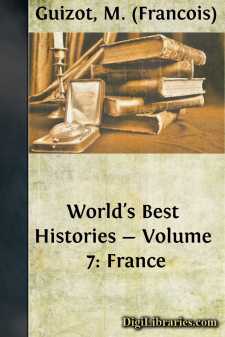 For more than ten years, amid unheard of shocks and sufferings, France had been seeking for a free and regular government, that might assure to her the new rights which had only been gained through tribulation. She had overthrown the Monarchy and attempted a Republic; she had accepted and rejected three constitutions, all the while struggling single-handed with Europe, leagued against her. She had undergone the violence of the Reign of Terror, the contradictory passions of the Assemblies, and the incoherent feebleness of the Directory. For the first time since the death of King Louis XIV., her history finds once more a centre, and henceforth revolves round a single man. For fifteen years, victorious or vanquished, at the summit of glory, or in the depths of abasement, France and Europe, overmastered by an indomitable will and unbridled passion for power, were compelled to squander their blood and their treasure upon that page of universal history which General Bonaparte claims for his own, and which he has succeeded in covering with glory and crime.

On the day following the 18th Brumaire, in the uncertainty of parties, in face of a constitution audaciously violated, and a government mainly provisional, the nation was more excited than apprehensive or disquieted. It had caught a glimpse of that natural power and that free ascendancy of genius to which men willingly abandon themselves, with a confidence which the most bitter deceptions have never been able to extinguish. Ardent and sincere republicans, less and less numerous, felt themselves conquered beforehand, by a sure instinct that was not misled by the protest of their adversaries. They bent before a new power, to which their old hatreds did not attach, which they believed to be in some sort created by their own hands, and of which they had not yet measured the audacity. The mass of the population, the true France, hailed with joy the hope of order and of a regular and strong administration. They were not prejudiced in favor of the philosophic constitution so long propounded by Sieyès. In the eyes of the nation, the government was already concentrated in the hands of General Bonaparte; it was in him that all were trusting, for repose at home and glory and peace abroad.

In fact, he was governing already, disregarding the prolonged discussions of the two legislative commissions, and the profound developments of the projects of Sieyès, expounded by M. Boulay. Before the Constitution of the year VIII, received the sanction of his dominant will, he had repealed the Law of Hostages, recalled the proscribed priests from the Isle of Oléron, and from Sinnamari most of those transported on 18th Fructidor. He had reformed the ministry, and distributed according to his pleasure the chief commands in the army. As Moreau had been of service to Bonaparte in his coup d'état, he was placed at the head of the army of the Rhine joined to the army of Helvetia, taken from Massena on the morrow of his most brilliant victories....