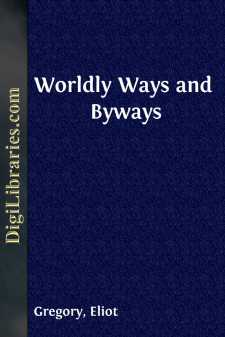 There existed formerly, in diplomatic circles, a curious custom, since fallen into disuse, entitled the Pêle Mêle, contrived doubtless by some distracted Master of Ceremonies to quell the endless jealousies and quarrels for precedence between courtiers and diplomatists of contending pretensions.  Under this rule no rank was recognized, each person being allowed at banquet, fête, or other public ceremony only such place as he had been ingenious or fortunate enough to obtain.

Any one wishing to form an idea of the confusion that ensued, of the intrigues and expedients resorted to, not only in procuring prominent places, but also in ensuring the integrity of the Pêle Mêle, should glance over the amusing memoirs of M. de Ségur.

The aspiring nobles and ambassadors, harassed by this constant preoccupation, had little time or inclination left for any serious pursuit, since, to take a moment’s repose or an hour’s breathing space was to risk falling behind in the endless and aimless race.  Strange as it may appear, the knowledge that they owed place and preferment more to chance or intrigue than to any personal merit or inherited right, instead of lessening the value of the prizes for which all were striving, seemed only to enhance them in the eyes of the competitors.

Success was the unique standard by which they gauged their fellows.  Those who succeeded revelled in the adulation of their friends, but when any one failed, the fickle crowd passed him by to bow at more fortunate feet.

No better picture could be found of the “world” of to-day, a perpetual Pêle Mêle, where such advantages only are conceded as we have been sufficiently enterprising to obtain, and are strong or clever enough to keep—a constant competition, a daily steeplechase, favorable to daring spirits and personal initiative but with the defect of keeping frail humanity ever on the qui vive.

Philosophers tell us, that we should seek happiness only in the calm of our own minds, not allowing external conditions or the opinions of others to influence our ways.  This lofty detachment from environment is achieved by very few.  Indeed, the philosophers themselves (who may be said to have invented the art of “posing”) were generally as vain as peacocks, profoundly pre-occupied with the verdict of their contemporaries and their position as regards posterity.

Man is born gregarious and remains all his life a herding animal.  As one keen observer has written, “So great is man’s horror of being alone that he will seek the society of those he neither likes nor respects sooner than be left to his own.”  The laws and conventions that govern men’s intercourse have, therefore, formed a tempting subject for the writers of all ages.  Some have labored hoping to reform their generation, others have written to offer solutions for life’s many problems.

The author of this little volume pretends to settle no disputes, aims at inaugurating no reforms.  He has lightly touched on passing topics and jotted down, “to point a moral or adorn a tale,” some of the more obvious foibles and inconsistencies of our American ways.  If a stray bit of philosophy has here and there slipped in between the lines, it is mostly of the laughing “school,” and used more in banter than in blame....