Works of Lucian of Samosata - Volume 03 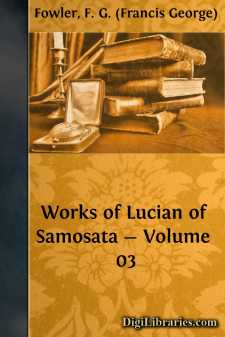 It was in the book of Fate that even this age of ours should not be destitute entirely of noteworthy and memorable men, but produce a body of extraordinary power, and a mind of surpassing wisdom. My allusions are to Sostratus the Boeotian, whom the Greeks called, and believed to be, Heracles; and more particularly to the philosopher Demonax. I saw and marvelled at both of them, and with the latter I long consorted. I have written of Sostratus elsewhere [Footnote: The life of Sostratus is not extant.], and described his stature and enormous strength, his open-air life on Parnassus, sleeping on the grass and eating what the mountain afforded, the exploits that bore out his surname—robbers exterminated, rough places made smooth, and deep waters bridged.

This time I am to write of Demonax, with two sufficient ends in view: first, to keep his memory green among good men, as far as in me lies; and secondly, to provide the most earnest of our rising generation, who aspire to philosophy, with a contemporary pattern, that they may not be forced back upon the ancients for worthy models, but imitate this best—if I am any judge—of all philosophers.

He came of a Cyprian family which enjoyed considerable property and political influence. But his views soared above such things as these; he claimed nothing less than the highest, and devoted himself to philosophy. This was not due to any exhortations of Agathobulus, his predecessor Demetrius, or Epictetus. He did indeed enjoy the converse of all these, as well as of Timocrates of Heraclea, that wise man whose gifts of expression and of understanding were equal. It was not, however, to the exhortations of any of these, but to a natural impulse towards the good, an innate yearning for philosophy which manifested itself in childish years, that he owed his superiority to all the things that ordinary men pursue. He took independence and candour for his guiding principles, lived himself an upright, wholesome, irreproachable life, and exhibited to all who saw or heard him the model of his own disposition and philosophic sincerity.

He was no half-baked enthusiast either; he had lived with the poets, and knew most of them by heart; he was a practised speaker; he had a knowledge of philosophic principles not of the superficial skin-deep order; he had developed and hardened his body by exercise and toil, and, in short, had been at the pains to make himself every man's equal at every point. He was consistent enough, when he found that he could no longer suffice to himself, to depart voluntarily from life, leaving a great reputation behind him among the true nobility of Greece.

Instead of confining himself to a single philosophic school, he laid them all under contribution, without showing clearly which of them he preferred; but perhaps he was nearest akin to Socrates; for, though he had leanings as regards externals and plain living to Diogenes, he never studied effect or lived for the applause and admiration of the multitude; his ways were like other people's; he mounted no high horse; he was just a man and a citizen....