Works of Lucian of Samosata - Volume 02 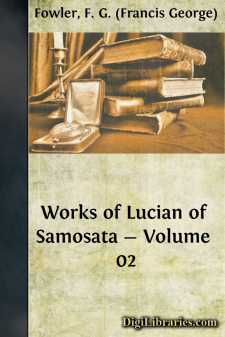 The dependent scholar! The great man's licensed friend!—if friend, not slave, is to be the word. Believe me, Timocles, amid the humiliation and drudgery of his lot, I know not where to turn for a beginning. Many, if not most, of his hardships are familiar to me; not, heaven knows, from personal experience, for I have never been reduced to such extremity, and pray that I never may be; but from the lips of numerous victims; from the bitter outcries of those who were yet in the snare, and the complacent recollections of others who, like escaped prisoners, found a pleasure in detailing all that they had been through. The evidence of the latter was particularly valuable. Mystics, as it were, of the highest grade, Dependency had no secrets for them. Accordingly, it was with keen interest that I listened to their stories of miraculous deliverance from moral shipwreck. They reminded me of the mariners who, duly cropped, gather at the doors of a temple, with their tale of stormy seas and monster waves and promontories, castings out of cargoes, snappings of masts, shatterings of rudders; ending with the appearance of those twin brethren [Footnote: The Dioscuri, Castor and Pollux, who were supposed to appear to sailors in distress.] so indispensable to nautical story, or of some other deus ex machina, who, seated at the masthead or standing at the helm, guides the vessel to some sandy shore, there to break up at her leisure—not before her crew (so benevolent is the God!) have effected a safe landing. The mariner, however, is liberal in embellishment, being prompted thereto by the exigencies of his situation; for by his appearance as a favourite of heaven, not merely a victim of fortune, the number of the charitable is increased. It is otherwise with those whose narrative is of domestic storms, of billows rising mountain high (if so I may phrase it) within four walls. They tell us of the seductive calm that first lured them on to those waters, of the sufferings they endured throughout the voyage, the thirst, the sea-sickness, the briny drenchings; and how at last their luckless craft went to pieces upon some hidden reef or at the foot of some steep crag, leaving them to swim for it, and to land naked and utterly destitute. All this they tell us: but I have ever suspected them of having convenient lapses of memory, and omitting the worst part for very shame. For myself, I shall have no such scruple. All that I have heard, or can reasonably infer, of the evils of dependence, I shall place before you. For either, friend, my penetration is at fault, or you have long had a hankering for this profession.

Yes, I have seen it from the first, whenever the conversation has fallen on this subject of salaried intellects. 'Happy men!' some enthusiast has cried. 'The elite of Rome are their friends. They dine sumptuously, and call for no reckoning. They are lodged splendidly, and travel comfortably—nay, luxuriously—with cushions at their backs, and as often as not a fine pair of creams in front of them. And, as if this were not enough, the friendship they enjoy and the handsome treatment they receive is made good to them with a substantial salary. They sow not, they plough not; yet all things grow for their use.' How I have seen you prick up your ears at such words as these! How wide your mouth has opened to the bait!

Now I will have a clear conscience in this matter. I will not be told hereafter that I saw you swallowing this palpable bait, and never stirred a finger to snatch it from you, and show you the hook while there was yet time; that I watched you nibbling, saw the hook well in and the fish hauled up, and then stood by shedding useless tears. A grave charge, indeed, were I to leave it in your power to bring it; such neglect would admit of no palliation. You shall therefore hear the whole truth. Now, in leisurely fashion, from without, not hereafter from within, shall you examine this weel from which no fish escapes. You shall take in hand this hook of subtle barb. You shall try the prongs of this eel-spear against your inflated cheek; and if you decide that they are not sharp, that they would be easily evaded, that a wound from them would be no great matter, that they are deficient in power and grasp—then write me among those who have cowardice to thank for their empty bellies; and for yourself, take heart of grace, and swoop upon your prey, and cormorant-wise, if you will, swallow all at a gulp.

But however much the present treatise is indebted to you for its existence, its application is not confined to you who are philosophers, whose ambition it is to form your conduct upon serious principles; it extends to the teachers of literature, of rhetoric, of music,—to all, in short, whose intellectual attainments can command a maintenance and a wage. And where the life, from beginning to end, is one and the same for all, the philosopher (I need not say), so far from being a privileged person, has but the additional ignominy of being levelled with the rest, and treated by his paymaster with as scant ceremony as the rest. In conclusion, whatever disclosures I may be led to make, the blame must fall in the first instance on the aggressors, and in the second instance on those who suffer the aggression. For me, unless truth and candour be crimes, I am blameless.

As to the vulgar rabble of trainers and toadies, illiterate, mean-souled creatures, born to obscurity, should we attempt to dissuade them from such pursuits, our labour would be wasted. Nor can we fairly blame them, for putting up any affront, rather than part with their employers. The life suits them; they are in their element....