Works of Lucian of Samosata - Volume 01 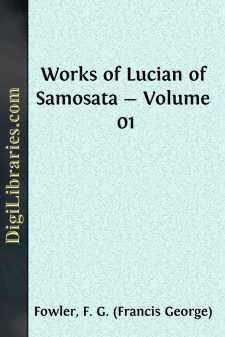 With the exception of a very small number of statements, of which the truth is by no means certain, all that we know of Lucian is derived from his own writings. And any reader who prefers to have his facts at first rather than at second hand can consequently get them by reading certain of his pieces, and making the natural deductions from them. Those that contain biographical matter are, in the order corresponding to the periods of his life on which they throw light, The Vision, Demosthenes, Nigrinus, The Portrait-study and Defence (in which Lucian is Lycinus), The Way to write History, The double ndictment (in which he is The Syrian), The Fisher (Parrhesiades), Swans and Amber, Alexander, Hermotimus_ (Lycinus), Menippus and Icaromenippus (in which Menippus represents him), A literary Prometheus, Herodotus, Zeuxis, Harmonides, The Scythian, The Death of Peregrine, The Book-fancier, Demonax, The Rhetorician's Vade mecum, Dionysus, Heracles, A Slip of the Tongue, Apology for 'The dependent Scholar.'_ Of these The Vision is a direct piece of autobiography; there is intentional but veiled autobiography in several of the other pieces; in others again conclusions can be drawn from comparison of his statements with facts known from external sources.

Lucian lived from about 125 to about 200 A.D., under the Roman Emperors Antoninus Pius, M. Aurelius and Lucius Verus, Commodus, and perhaps Pertinax. He was a Syrian, born at Samosata on the Euphrates, of parents to whom it was of importance that he should earn his living without spending much time or money on education. His maternal uncle being a statuary, he was apprenticed to him, having shown an aptitude for modelling in the wax that he surreptitiously scraped from his school writing-tablets. The apprenticeship lasted one day. It is clear that he was impulsive all through life; and when his uncle corrected him with a stick for breaking a piece of marble, he ran off home, disposed already to think he had had enough of statuary. His mother took his part, and he made up his mind by the aid of a vision that came to him the same night.

It was the age of the rhetoricians. If war was not a thing of the past, the shadow of the pax Romana was over all the small states, and the aspiring provincial's readiest road to fame was through words rather than deeds. The arrival of a famous rhetorician to lecture was one of the important events in any great city's annals; and Lucian's works are full of references to the impression these men produced, and the envy they enjoyed. He himself was evidently consumed, during his youth and early manhood, with desire for a position like theirs. To him, sleeping with memories of the stick, appeared two women, corresponding to Virtue and Pleasure in Prodicus's Choice of Heracles—the working woman Statuary, and the lady Culture. They advanced their claims to him in turn; but before Culture had completed her reply, the choice was made: he was to be a rhetorician. From her reminding him that she was even now not all unknown to him, we may perhaps assume that he spoke some sort of Greek, or was being taught it; but he assures us that after leaving Syria he was still a barbarian; we have also a casual mention of his offering a lock of his hair to the Syrian goddess in his youth....