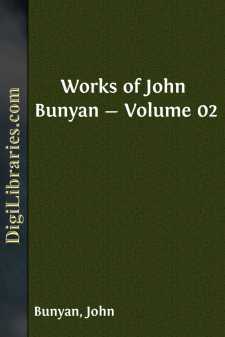 This treatise is one of those ten distinct works, which the author had prepared for the press, when he was so suddenly summoned to the Celestial City. Well did his friends in the ministry, Ebenezer Chandler and John Wilson, call it "an excellent manuscript, calculated to assist the Christian that would grow in grace, and to win others over to Jesus Christ."

It was first published, with a selection of Bunyan's Works in a folio volume, in 1692, about four years after the author's decease; and although it is a treatise exhibiting very deep research and calculated for extensive usefulness, it does not appear ever to have been published as a separate volume. Like all other of his works, it is original; no one before him treated this subject with such profound depth of thought, nor with such clear Christian philosophy.

The revered John Bunyan proves in this, as in all other of his works, that he was a real and not a pretended descendant from the apostles,—he breathes their spirit—he knew his Master's work, and faithfully discharged his solemn requirements. His object was as pure as it was apparent; to preach not himself, but Christ Jesus his Lord. One desire appears to have influenced him in writing all his works—that of shrinking back and hiding himself behind his Master, while exhibiting the unsearchable, Divine, eternal riches of His grace.

This treatise is admirably adapted to warn the thoughtless—break the stony heart—convince the wavering—cherish the young inquirer—strengthen the saint in his pilgrimage, and arm him for the good fight of faith—and comfort the dejected, doubting, despairing Christian. It abounds with ardent sympathy for the broken-hearted, a cordial suited to every wounded conscience; while, at the same time, it thunders in awful judgment upon the impenitent and the hypocritical professor: wonders of grace to God belong, for all these blessings form but a small part of the unsearchable riches.

The reader should keep in his recollection, that this treatise was originally conceived for the pulpit; and afterwards, probably with great additions, written for the press. This will account for the divisions and sub-divisions, intended to assist a hearer's memory; or to enable a ready writer, by taking notes of each part, to digest prayerfully in private, what he had heard in the public ministry of the word,—a practice productive of great good to individuals, and by which families may be much profited while conversing upon the truths publicly taught in the church; instead of what Bunyan would have justly called, frothy conversation about the dress or appearances of their fellow-worshippers.

This discourse has been published in every edition of the works of our great author, but, most strangely, the references to Scripture are omitted in all the editions since that of 1737. Bunyan's anxiety at every step of this momentous inquiry is to shew a "thus saith the Lord," in proof of every assertion. In this treatise only, there are nearly four hundred and forty distinct references to the holy oracles. These are all carefully restored, and have been collated with the standard text, for want of which some imperfections had crept in, even to the old editions; and where the author preferred the Genevan or Puritan version, it is shewn by a note at the foot of the page.

To point out beauties in such a discourse, is to point to the whole treatise—it is all admirable; a solemn earnestness is found in every sentence; even where Bunyan modestly differs with many excellent divines, when treating upon the sufferings of the Saviour, between the period of his crucifixion and of his resurrection: this is worthy of our prayerful consideration; ever keeping in remembrance those deeply impressive—those awfully triumphant words of our Lord, "It is finished."

The catholic spirit, which so pervaded the mind of Bunyan, appears conspicuously in this discourse; and whatever bitter controversy this spirit occasioned him, it ought to be impressed upon the heart of every Christian professor....