Work and Win or, Noddy Newman on a Cruise 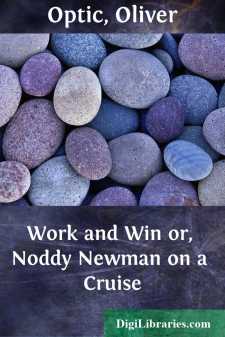 CHAPTER I. THE MISCHIEF-MAKERS.

"Here, Noddy Newman! you haven't washed out the boat-house yet," said Ben, the boatman, as the young gentleman thus addressed was ambling down towards the river.

"Hang the boat-house!" exclaimed Noddy, impatiently, as he stopped short in his walk, and seemed to be in doubt whether he should return or continue on his way.

"You know what Miss Bertha says—don't you?"

"Yes, I know what she says," added Noddy, rubbing his head, as though he were trying to reconcile his present purpose, whatever it was, with the loyalty he owed to Bertha. "I suppose it don't make much difference to her whether I wash out the boat-house now or by and by."

"I don't know anything about that, my boy," said the old man. "Miss Bertha told me to find some regular work for you to do every day. I found it, and she say you must wash out the boat-house every morning before nine o'clock. If you don't do it, I shall report you to her. That's all I've got to say about it."

"I calculate to wash out the boat-house."

"You've only half an hour to do it in, then. You've not only got to wash it out every morning, but you have got to do it before nine o'clock. Them's the orders. I always obey orders. If Miss Bertha should tell me to tie you up, and give you as big a licking as you deserve, I should do it."

"I haven't got any such orders, mind ye, Noddy; so we won't dispute about that. Now, go and wash out the boat-house like a good boy, and don't make any fuss about it."

Noddy deliberated a few moments more. He evidently disliked the job, or did not wish to do it at that particular time; but Miss Bertha's influence was all-powerful; and though he would have fought, tooth and nail, against anything like compulsion on the part of Ben, he could not resist the potent spell which the name of his young mistress cast upon him.

"Hang the old boat-house!" exclaimed he, as he stamped his foot upon the ground, and then slowly retraced his steps towards the boatman.

"Hang it, if you like, Noddy, but wash it out first," said Ben, with a smile, as he observed the effect of the charm he had used to induce the wayward youth to do his duty.

"I wish the boat-house was burned up!" added Noddy, petulantly.

"Don't say so, Noddy. What would Miss Bertha think to hear you talk like that?"

"You can tell her, if you like," replied Noddy, as he rushed desperately into the boat-house to do the disagreeable job.

Noddy Newman was an orphan; and no one in the vicinity of Woodville even knew what his real name was. Two years before, Bertha Grant had taken the most tender care of him, after an accident by which he had been severely injured. Previous to that time he had been a vagabond, roaming about the woods and the villages, sleeping in barns and out-buildings, and stealing his food when he could obtain it by no other means. Efforts had been made to commit him to the poorhouse; but he had cunningly avoided being captured, and retained his freedom until the accident placed him under the influence of Bertha Grant, who had before vainly attempted to induce him to join her mission-school in the Glen....