Words of Cheer for the Tempted, the Toiling, and the Sorrowing 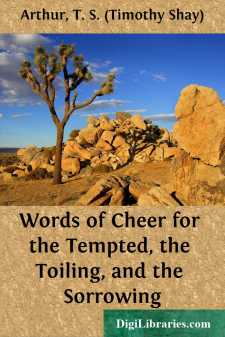 A LADY sat alone in her own apartment one clear evening, when the silver stars were out, and the moon shone pure as the spirit of peace upon the rebellious earth. How lovely was every outward thing! How beautiful is God's creation! The window curtains were drawn close, and the only light in the cheerful room, was given by a night-lamp that was burning on the mantel-piece. The occupant, who perhaps had numbered about thirty-five years, was sitting by a small table in the centre of the room, her head leaning upon one slender hand; the other lay upon the open page of a book in which she had endeavoured to interest herself. But the effort had been vain; other and stronger feelings had overpowered her; there was an expression of suffering upon the gentle face, over which the tears rained heavily. For a brief moment she raised her soft blue eyes upward with an appealing look, then sunk her head upon the table before her, murmuring,

"Father! forgive me! it is good for me. Give me strength to bear everything. Pour thy love into my heart, for I am desolate—if I could but be useful to one human being—if I could make one person happier, I should be content. But no! I am desolate—desolate. Whose heart clings to mine with the strong tendrils of affection? Who ever turns to me for a smile? Oh! this world is so cold—so cold!"

And that sensitive being wept passionately, and pressed her hand upon her bosom as if to still its own yearnings.

Mary Clinton had met with many sorrows; she was the youngest of a large family; she had been the caressed darling in her early days, for her sweetness won every heart to love. She had dwelt in the warm breath of affection, it was her usual sunshine, and she gave it no thought while it blessed her; a cold word or look was an unfamiliar thing. A most glad-hearted being she was once! But death came in a terrible form, folded her loved ones in his icy arms and bore them to another world. A kind father, a tender mother, a brother and sister, were laid in the grave, in one short month, by the cholera. One brother was yet left, and she was taken to his home, for he was a wealthy merchant. But there seemed a coldness in his splendid house, a coldness in his wife's heart. Sick in body and in mind, the bereft one resolved to travel South, and visit among her relations, hoping to awaken her interest in life, which had lain dormant through grief. She went to that sunny region, and while there, became acquainted with a man of fine intellect and fascinating manners, who won her affections, and afterwards proved unworthy of her. Again the beauty of her life was darkened, and with a weary heart she wore out the tedious years of her joyless existence. She was an angel of charity to the poor and suffering. She grew lovelier through sorrow. A desire to see her brother, her nearest and dearest relative, called her North again, and when our story opens she was in the bosom of his home, a member of his family. He loved her deeply, yet she felt like an alien—his wife had not welcomed her as a sister should....