Words for the Wise 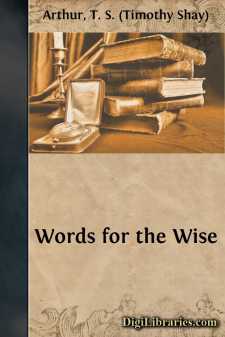 "THERE is one honest man in the world, I am happy to say," remarked a rich merchant, named Petron, to a friend who happened to call in upon him.

"Is there, indeed! I am glad to find you have made a discovery of the fact. Who is the individual entitled to the honourable distinction?"

"You know Moale, the tailor?"

"Yes. Poor fellow! he's been under the weather for a long time."

"I never doubted his being honest, Mr. Petron."

"I have reason to know that he is. But I once thought differently. When he was broken up in business some years ago, he owed me a little bill, which I tried to get out of him as hard as any one ever did try for his own. But I dunned and dunned him until weary, and then, giving him up as a bad case, passed the trifle that he owed me to account of profit and loss. He has crossed my path a few times since; but, as I didn't feel toward him as I could wish to feel toward all men, I treated him with marked coldness. I am sorry for having done so, for it now appears that I judged him too severely. This morning he called in of his own free will, and paid me down the old account. He didn't say any thing about interest, nor did I, though I am entitled to, and ought to have received it. But, as long as he came forward of his own accord and settled his bill, after I had given up all hope of ever receiving it, I thought I might afford to be a little generous and not say any thing about the interest; and so I gave him a receipt in full. Didn't I do right?"

"In what respect?" asked the friend.

"In forgiving him the interest, which I might have claimed as well as not, and which he would, no doubt, have paid down, or brought me at some future time."

"Oh, yes. You were right to forgive the interest," returned the friend, but in a tone and with a manner that struck the merchant as rather singular. "No man should ever take interest on money due from an unfortunate debtor."

"Indeed! Why not?" Mr. Petron looked surprised. "Is not money always worth its interest?"

"So it is said. But the poor debtor has no money upon which to make an interest. He begins the world again with nothing but his ability to work; and, if saddled with an old debt—principal and interest—his case is hopeless. Suppose he owes ten thousand dollars, and, after struggling hard for three or four years, gets into a position that will enable him to pay off a thousand dollars a year. There is some chance for him to get out of debt in ten years. But suppose interest has been accumulating at the rate of some six hundred dollars a year. His debt, instead of being ten thousand, will have increased to over twelve thousand dollars by the time he is in a condition to begin to pay off any thing; and then, instead of being able to reduce the amount a thousand dollars a year, he will have to let six hundred go for the annual interest on the original debt. Four years would have to elapse before, under this system, he would get his debt down to where it was when he was broken up in business....