Word Study and English Grammar A Primer of Information about Words, Their Relations and Their Uses 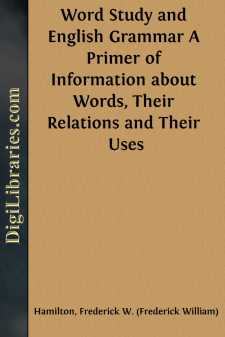 Word study and English grammar are important to the young printer for several reasons. In the first place, disregard of the correct use and combination of words is a distinct mark of inferiority and a serious bar to business and social advancement. A man's use of words is commonly taken as a measure of his knowledge and even of his intelligence. Carelessness in this regard often causes a man to be held in much less esteem than he really deserves.

This little book is not intended to be either a rhetoric or a grammar. It is only intended to review some of the simplest principles of both subjects, to point out a few of the commonest mistakes, and to show the importance to the apprentice of the careful study and constant use of some of the many books on words, their combinations, and their uses.

All the words in the English language belong to one or another of nine families, each of which family has a special duty. If you will always remember to which family a word belongs and just what that family does, you will be saved from many very common errors. These nine families are: 1, nouns; 2, adjectives; 3, articles; 4, verbs; 5, pronouns; 6, adverbs; 7, prepositions; 8, conjunctions; 9, interjections. This order of enumeration is not exactly the same as will be found in the grammars. It is used here because it indicates roughly the order of the appearance of the nine families in the logical development of language. Some forms of interjections, however, may very probably have preceded any language properly so called.

A noun is a word used as the name of anything that can be thought of, John, boy, paper, cold, fear, crowd. There are three things about a noun which indicate its relation to other words, its number, its gender, and its case. There are two numbers, singular meaning one, and plural meaning more than one.

The plural is generally formed by adding s to the singular. There are a small number of nouns which form their plurals differently, mouse, mice; child, children; foot, feet. These must be learned individually from a dictionary or spelling book. There are some nouns which undergo changes in the final syllable when the s is added, torch, torches; staff, staves; fly, flies. These also must be learned individually. There are some nouns which have no singular, such as cattle, clothes, some which have no plural, such as physics, honesty, news, and some which are the same in both singular and plural, such as deer, trout, series. Care must be taken in the use of these nouns, as in some cases their appearance is misleading, e. g., mathematics, physics, and the like are singular nouns having no plural, but owing to their form they are often mistaken for plurals.

Compound nouns, that is to say, nouns formed by the combination of two or three words which jointly express a single idea, generally change the principal word in the forming of the plural, hangers-on, ink rollers, but in a few cases both words change, for example, men-servants....