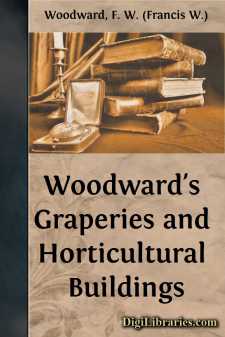 It is less than twenty-five years since the first cold Grapery was erected on the Hudson. Since the success of the culture of the delicious varieties of the exotic Grape has been demonstrated, the number of graperies has annually increased, and during the last ten years in a very rapid ratio, until they have become recognized as possible and desirable, among those even whose circumstances are moderate and limited. The newly-awakened interest in this branch of culture is manifested in the number and variety of books and other publications on this subject, the space devoted to it in the agricultural and horticultural journals, and especially in the increased number of graperies and vineyards which have been erected and planted in the last decade. There seems to be a general consciousness of the fact that, in the struggle for wealth and the greed for wide possessions, as well as in the inherent difficulties of our situation—thrown as we have been upon a new and vast continent—we have too long neglected the culture of the Vine, one of the most ancient and useful arts of life; an art which has, in all ages, been the fruitful source of comfort and luxury, of health and happiness, to the masses of mankind. The neglect of this important and beautiful department of culture is the more remarkable, since our country embraces every degree of latitude, and every variety of climate and soil in which the grape is known to flourish.

It having been demonstrated by years of experiment, resulting in every case in utter failure, that the foreign grape cannot be successfully grown in the open air in the United States—the States of the Pacific excepted—we are obliged to confine our culture to glazed structures, erected for the purpose, where an atmosphere similar to the vine-growing regions of Europe can be maintained, and that bane of the foreign grape, the mildew, avoided.

The culture of choice foreign grapes under glass in this country dates from before the War of Independence, from which time to this the beautiful but perishable Chasselas, the delicious Frontignac, and the luscious Hamburg, have been, here and there, carefully cultivated and ripened. But these efforts have been chiefly confined to the vicinity of large cities, and the management has mainly been kept in the hands of foreign gardeners, who have imported themselves from the vine regions of Europe, to instruct us in the arts and mysteries of grape-growing.

That many of these are men of great practical experience in the art, we know full well; but, however skillful they may have been in foreign countries, their success in our climate has been achieved only by discarding many of their preconceived ideas, and adapting their practice to agree with the peculiarities of our climate. When the public shall have learned that the culture of grapes under glass is only a plain and simple pursuit or pastime, which any one of ordinary capacity can comprehend and successfully carry out, then we shall have made a decided and important advance.

The American people are rather disposed to be self-reliant, and we may, therefore, safely predict that, when we take hold, in real earnest, of the business of grape culture, either under glass or in the open air, we shall do it with our customary determination and energy, and that success will just as surely follow as it has in other cases where imported ideas have been improved upon and superseded. We have shown, we think, in other fields of enterprise, that we may venture to rely upon native-born talent, ingenuity and industry, to work out this problem also, and that, by a practical demonstration, we shall, gradually and surely, reach a point of success beyond what has been attained with all the advantages of foreign aid. And this success will be equalled by the simplicity of its methods. Grape-growing in this country is yet in its infancy, and as respects the varieties best adapted to our soil and climate, essentially experimental....