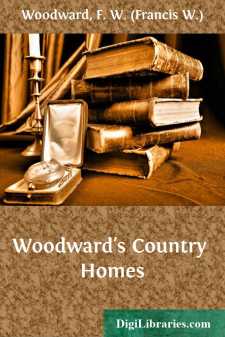 In presenting to the public a new work on Domestic Architecture, it is our aim to furnish practical designs and plans, adapted to the requirements of such as are about to build, or remodel and improve, their Country Homes.

The rapid progress in rural improvement and domestic embellishment all over the land, during the last quarter of a century, is evident to the observation of every traveler, and, as we have found during several years of professional experience, there has grown up a demand for architectural designs of various grades, from the simple farm cottage to the more elaborate and costly villa, which is not supplied by the several excellent works on this subject which are within the reach of the building and reading public.

Among the permanent dwellers in the country this spirit of improvement, fostered as it is by the diffusion of publications in the various departments of Rural Art, and by a wider and more genial general culture as the means of intercommunication and education are increased, is becoming more manifest every year. But besides these intelligent farmers and tradesmen who make the country their home the year round, there is a large class of persons whose tastes or business avocations compel them to reside a considerable portion of the year in our cities or suburbs—prosperous merchants, bankers, professional men, and wealthy citizens—who have the tastes and means to command such enjoyments and luxuries as the country affords; who need the change in scenes, associations, employments and objects of interest, for themselves and their households, and who enjoy, with a keen relish, the seclusion, the comparative freedom from restraint, the pure, sweet air, the broad, open sunshine, and the numerous other rural advantages which are essentially denied them in their city homes.

In former years this class of people resorted, almost exclusively, to the sea-side, and a few popular mineral springs, taking in, perhaps, Niagara in their transit, and rarely venturing into the wild and unexplored regions of Lake George. They returned to town in the early days of September, with many a backward, longing look at the attractions and delights from which they reluctantly tore themselves away, and settled down again to the weary tread-mill of business. But for some years past this class has largely increased in number, and instead of confining themselves to their former resorts, they now seek the upper country, and prolong their stay into the glorious days of Autumn. Many of them have provided permanent summer homes, among the hills and on the lake or river shores. They have bought, and built, and planted, until they have identified themselves with the chosen spot, and as their trees have taken root in the fertile soil, so have their affections taken root in the beautiful country. They hasten gladly to these rural scenes with the opening Summer, and they leave them with regret when the exigencies of business require their presence in the city,—when the Summer suns have ripened the luscious fruits, and the flowers fade with the frosty kisses of the cold, and the passenger birds fly Southward....