Woodside or, Look, Listen, and Learn. 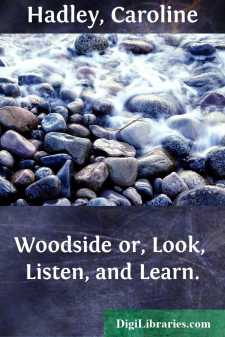 One bright spring day, not so very long ago, three little children arrived at their grandfather's house. They had come to pay a long visit, as their parents were travelling abroad for two or three months.

Now grandpapa lived less than twenty miles from London, yet his house was quite in the country,—indeed you might have thought that it was a hundred miles away from any town,—and it was called Woodside.

You may be sure that Jack, Mary, and Annie—for those were the names of the children—thought the change from London most delightful.

Jack was the eldest—that is why I have put his name before those of his sisters—and he was ten years old. Mary was the next in age, and she was nearly nine; while Annie, the youngest, was seven.

On the day they arrived they felt very quiet, all was so strange after London; besides, they were busy unpacking their toys and picture-books, and in finding places for all their treasures in the rooms grandmamma had set apart for them.

They went to bed early too, and never once woke till their nurse called them in the morning. At first they felt sorry it was time to get up, but when Jane drew up the blinds, and they saw the bright sunshine and the clear blue sky, they made haste to dress, so that after breakfast was over they might go out of doors.

Each of them had visited at Woodside several times before, but they had not been all together there at the same time. They knew very well how many interesting things there were to see out of doors, and they hoped that there would be something new. There was sure to be a difference among the animals and flowers.

The old house looked the same as they drove up to it, with its twenty oak trees in a semi-circle and the gates in the middle. There was the same watch-dog, Lion; and on the parlour hearth-rug, lying curled up in the sunshine, lay Smut, grandmamma's large black cat.

A very respectable old gentleman was Smut, with his sleek, glossy coat; but he stood too much on his dignity ever to play. The children coaxed him and patted him; yet he took no notice, he just curled himself round and went to sleep again.

A proud old cat was Smut; he would never touch food or milk in the kitchen. His food was put on a plate for him out of doors, and he had his milk in a saucer in the parlour. When he was out of doors, he always came in again by the front door, never at the back.

The children soon spied something new in the shape of a long-haired kitten, whose fur was gray and soft. She was bright and lively, and was very pleased to play with the children; for Smut would never take any notice of her, or play with her one bit: so she and the children became very good friends, and had many a game together.

After breakfast was over, grandmamma told the children they might put on their hats and go out of doors. They did not need to be spoken to twice.

First of all they had a run round the garden, peeped into the greenhouse, and said "How do you do?" to the gardener. But they did not stop long among the lovely spring flowers, for they were in such haste to see the animals.

THE VISIT TO THE PONY.Page 13.

Jack said, "We must pay our first visit to the pony;" so away they went to the stable.

The pony was very sober and steady, and, I am sorry to add, rather lazy; so the children did not get much fun out of him....