Wood Rangers The Trappers of Sonora 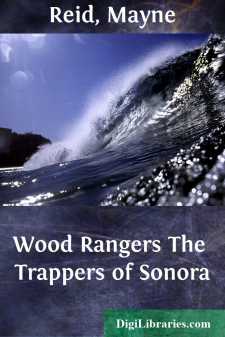 Chapter One. Pepé, The Sleeper.

No landscape on the Biscayan coast, presents a more imposing and picturesque aspect than the little village of Elanchovi. Lying within an amphitheatre of cliffs, whose crests rise above the roofs of the houses, the port is protected from the surge of the sea by a handsome little jetty of chiselled stone; while the single street of which the village is composed, commencing at the inner end of the mole, sweeps boldly up against the face of the precipice. On both sides, the houses, disposed in a sort of echelon, rise, terrace-like, one above the other; so that viewed from a distance, the street presents the appearance of a gigantic stairway.

In these the common dwellings, there is not much variety of architecture; since the village is almost exclusively inhabited by poor fishermen. There is one building, however, that is conspicuous—so much so as to form the principal feature of the landscape. It is an old chateau—perhaps the only building of this character in Spain—whose slate roofs and gothic turrets and vanes, rising above the highest point of the cliffs, overlook the houses of the village.

This mansion belonged to the noble family of Mediana, and formed part of the grand estates of this ancient house. For a long period, the Counts of Mediana had not inhabited the chateau of Elanchovi, and it had fallen into a state of neglect and partial decay, presenting a somewhat wild and desolate aspect. However, at the beginning of the year 1808, during the troubles of the French invasion, the Count Don Juan, then head of the family, had chosen it as a safe residence for his young wife Doña Luisa, whom he passionately loved.

Here Don Juan passed the first months of his married life—a marriage celebrated under circumstances of sad augury. The younger brother of Don Juan, Don Antonio de Mediana, had also fervently loved the Doña Luisa; until finding her preference for his brother, he had given up his suit in anger, and quitted the country. He had gone, no one knew whither; and though after a time there came back a rumour of his death, it was neither confirmed nor contradicted.

The principal reason why the Count had chosen this wild spot as a residence for his lady was this:—He held a high command in the Spanish army, and he knew that duty would soon call him into the field. The alcalde of Elanchovi had been an old servant of the Mediana family, and had been raised to his present rank by their influence. Don Juan, therefore, believed he could rely upon the devotion of this functionary to the interests of his house, and that during his absence Doña Luisa would find security under the magisterial protection. Don Ramon Cohecho was the name of the chief magistrate of Elanchovi.

The Count was not permitted long to enjoy the happiness of his married life. Just as he had anticipated, he soon received orders to join his regiment; and parted from the chateau, leaving his young wife under the special care of an old and respectable domestic—the steward Juan de Dios Canelo....