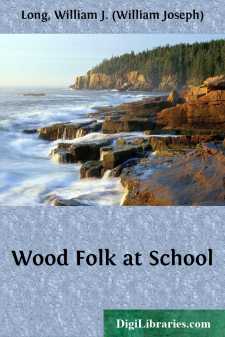 To this day it is hard to understand how any eyes could have found them, they were so perfectly hidden. I was following a little brook, which led me by its singing to a deep dingle in the very heart of the big woods. A great fallen tree lay across my path and made a bridge over the stream. Now, bridges are for crossing; that is plain to even the least of the wood folk; so I sat down on the mossy trunk to see who my neighbors might be, and what little feet were passing on the King’s highway.

Here, beside me, are claw marks in the moldy bark. Only a bear could leave that deep, strong imprint. And see! there is where the moss slipped and broke beneath his weight. A restless tramp is Mooween, who scatters his records over forty miles of hillside on a summer day, when his lazy mood happens to leave him for a season. Here, on the other side, are the bronze-green petals of a spruce cone, chips from a squirrel’s workshop, scattered as if Meeko had brushed them hastily from his yellow apron when he rushed out to see Mooween as he passed. There, beyond, is a mink sign, plain as daylight, where Cheokhes sat down a little while after his breakfast of frogs. And here, clinging to a stub, touching my elbow as I sit with heels dangling idly over the lazy brook, is a crinkly yellow hair, which tells me that Eleemos the Sly One, as Simmo calls him, hates to wet his feet and so uses a fallen tree or a stone in the brook for a bridge, like his brother fox of the settlements.

Just in front of me was another fallen tree, lying alongside the stream in such a way that no animal more dangerous than a roving mink would ever think of using it. Under its roots, away from the brook, was a hidden and roomy little house with hemlock tips drooping over its doorway for a curtain. “A pretty place for a den,” I thought; “for no one could ever find you there.” Then, as if to contradict me, a stray sunbeam found the spot and sent curious bright glintings of sheen and shadow dancing and playing under the fallen roots and trunk. “Beautiful!” I cried, as the light fell on the brown mold and flecked it with white and yellow. The sunbeam went away again, but seemed to leave its brightness behind it; for there were still the gold-brown mold under the roots and the flecks of white and yellow. I stooped down to see it better; I reached in my hand—then the brown mold changed suddenly to softest fur; the glintings of white and yellow were the dappled sides of two little fawns, lying there very still and frightened, just where their mother had hidden them when she went away.

They were but a few days old when I found them. Each had on his little Joseph’s coat; and each, I think, must have had also a magic cloak somewhere about him; for he had only to lie down anywhere to become invisible. The curious markings, like the play of light and shadow through the leaves, hid the little owners perfectly so long as they held themselves still and let the sunbeams dance over them. Their beautiful heads were a study for an artist,—delicate, graceful, exquisitely colored. And their great soft eyes had a questioning innocence, as they met yours, which went straight to your heart and made you claim the beautiful creatures for your own instantly. Indeed, there is nothing in all the woods that so takes your heart by storm as the face of a little fawn.

They were timid at first, lying close without motion of any kind. The instinct of obedience—the first and strongest instinct of every creature born into this world—kept them loyal to the mother’s command to stay where they were and be still till she came back....