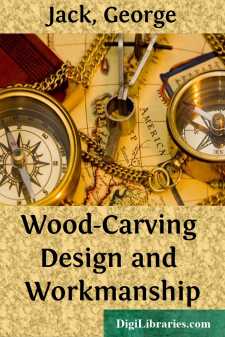 In issuing these volumes of a series of Handbooks on the Artistic Crafts, it will be well to state what are our general aims.

In the first place, we wish to provide trustworthy text-books of workshop practise, from the points of view of experts who have critically examined the methods current in the shops, and putting aside vain survivals, are prepared to say what is good workmanship, and to set up a standard of quality in the crafts which are more especially associated with design. Secondly, in doing this, we hope to treat design itself as an essential part of good workmanship. During the last century most of the arts, save painting and sculpture of an academic kind, were little considered, and there was a tendency to look on "design" as a mere matter of appearance. Such "ornamentation" as there was was usually obtained by following in a mechanical way a drawing provided by an artist who often knew little of the technical processes involved in production. With the critical attention given to the crafts by Ruskin and Morris, it came to be seen that it was impossible to detach design from craft in this way, and that, in the widest sense, true design is an inseparable element of good quality, involving as it does the selection of good and suitable material, contrivance for special purpose, expert workmanship, proper finish, and so on, far more than mere ornament, and indeed, that ornamentation itself was rather an exuberance of fine workmanship than a matter of merely abstract lines. Workmanship when separated by too wide a gulf from fresh thought—that is, from design—inevitably decays, and, on the other hand, ornamentation, divorced from workmanship, is necessarily unreal, and quickly falls into affectation. Proper ornamentation may be defined as a language addressed to the eye; it is pleasant thought expressed in the speech of the tool.

In the third place, we would have this series put artistic craftsmanship before people as furnishing reasonable occupations for those who would gain a livelihood. Although within the bounds of academic art, the competition, of its kind, is so acute that only a very few per cent can fairly hope to succeed as painters and sculptors; yet, as artistic craftsmen, there is every probability that nearly every one who would pass through a sufficient period of apprenticeship to workmanship and design would reach a measure of success.

In the blending of handwork and thought in such arts as we propose to deal with, happy careers may be found as far removed from the dreary routine of hack labor as from the terrible uncertainty of academic art. It is desirable in every way that men of good education should be brought back into the productive crafts: there are more than enough of us "in the city," and it is probable that more consideration will be given in this century than in the last to Design and Workmanship.

This third volume of our series treats of one branch of the great art of sculpture, one which in the past has been in close association with architecture. It is, well, therefore, that besides dealing thoroughly, as it does, with the craftsmanship of wood-carving, it should also be concerned with the theory of design, and with the subject-matter which the artist should select to carve.

Such considerations should be helpful to all who are interested in the ornamental arts. Indeed, the present book contains some of the best suggestions as to architectural ornamentation under modern circumstances known to me. Architects can not forever go on plastering buildings over with trade copies of ancient artistic thinking, and they and the public must some day realize that it is not mere shapes, but only thoughts, which will make reasonable the enormous labor spent on the decoration of buildings....