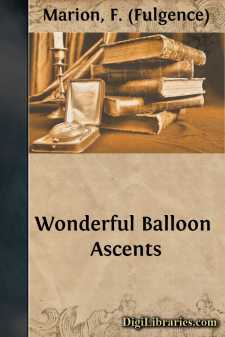 "Let posterity know, and knowing be astonished, that on the fifteenth day of September, 1784, Vincent Lunardi of Lucca, in Tuscany, the first aerial traveller in Britain, mounting from the Artillery Ground in London, and traversing the regions of the air for two hours and fifteen minutes, on this spot revisited the earth. In this rude monument for ages be recorded this wondrous enterprise successfully achieved by the powers of chemistry and the fortitude of man, this improvement in science which the great Author of all Knowledge, patronising by his Providence the inventions of mankind, hath graciously permitted, to their benefit and his own eternal glory."

The stone upon which the above inscription was carved, stands, or stood recently, near Collier's End, in the parish of Standon, Hertfordshire; and it will possibly afford the English reader a more accurate idea of the feelings with which the world hailed the discovery of the balloon than any incident or illustration drawn from the annals of a foreign country.

The work which we now introduce to our readers does not exaggerate the case when it declares that no discovery of modern times has aroused so large an amount of enthusiasm, has excited so many hopes, has appeared to the human race to open up so many vistas of enterprise and research, as that for which we are mainly indebted to the Brothers Montgolfier. The discovery or the invention of the balloon, however, was one of those efforts of genius and enterprise which have no infancy. It had reached its full growth when it burst upon the world, and the ninety years which have since elapsed have witnessed no development of the original idea. The balloon of to-day—the balloon in which Coxwell and Glaisher have made their perilous trips into the remote regions of the air—is in almost every respect the same as the balloon with which "the physician Charles," following in the footsteps of the Montgolfiers, astonished Paris in 1783. There are few more tantalising stories in the annals of invention than this. So much had been accomplished when Roziers made his first aerial voyage above the astonished capital of France that all the rest seemed easy. The new highway appeared to have been thrown open to the world, and the dullest imagination saw the air thronged with colossal chariots, bearing travellers in perfect safety, and with more than the speed of the eagle, from city to city, from country to country, reckless of all the obstacles—the seas, and rivers, and mountains—which Nature might have placed in the path of the wayfarer. But from that moment to the present the prospect which was thus opened up has remained a vision and nothing more. There are—as those who visited the Crystal Palace two years ago have reason to know—not a few men who still believe in the practicability of journeying by air. But, with hardly an exception, those few have abandoned all idea of utilising the balloon for this purpose. The graceful "machine" which astonished the world at its birth remains to this day as beautiful, and as useless for the purposes of travel, as in the first hour of its history....