Won from the Waves 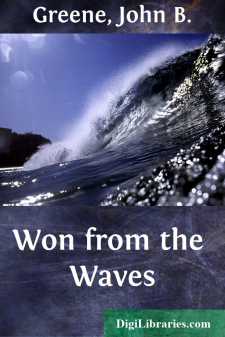 It was a gloomy evening. A small group of fishermen were standing—at the end of a rough wooden pier projecting out into the water and forming the southern side of the mouth of a small river. A thick mist, which drove in across the German Ocean, obscured the sky, and prevented any object being seen beyond a few hundred fathoms from the shore, on which the dark leaden-coloured waves broke lazily in with that sullen-sounding roar which often betokens the approach of a heavy gale.

On the north side of the river was a wide extent of sandy ground, where the vegetation consisted of stunted furze-bushes and salt-loving plants with leaves of a dull pale green, growing among patches of coarse grass, the roots of which assisted to keep the sand from being blown away by the fierce wintry gales which blew across it. On the right hand of the fishermen as they looked seaward, and beyond an intervening level space, rose a line of high cliffs of light clay and sand extending far to the southward, with a narrow beach at their base. Parallel with the river was a green bank, on the sides of which were perched several cottages, the materials composing them showing that they were the abodes of the hardy men who gained their livelihood on the salt deep. The palings which surrounded them, the sheds and outhouses, and even the ornaments with which they were decorated, were evidently portions of wrecks. Over the door of one might be seen the figure-head of some unfortunate vessel. An arbour, not rustic but nautical, was composed of the carved work of a Dutch galliot; indeed, the owners of few had failed to secure some portion of the numerous hapless vessels which from time to time had been driven on their treacherous coast.

On the level ground between the cliff and the river stood two or three other cottages. One, the largest of them, appeared to be built almost entirely of wreck wood, from the uneven appearance presented by the walls and roof, the architect having apparently adapted such pieces of timber as came to hand without employing the saw to bring them into more fitting shape; the chimney, however, and the lower portions of the walls, were constructed of hewn stone, taken probably from some ancient edifice long demolished. Though the exterior of the cottage, with its boat and fish sheds, looked somewhat rough, it had altogether a substantial and not uncomfortable appearance.

The most conspicuous object in the landscape was a windmill standing a little way to the southward on the top of the cliff. Its sails were moving slowly round, but their tattered condition showed that but a small amount of grist was ground within.

Such was the aspect of the little village of Hurlston and its surroundings towards the end of the last century. It was not especially attractive—indeed few scenes would have appeared to advantage at that moment; but when sunshine lighted up the blue dancing waters, varied by the shadows of passing clouds, the marine painter might have found many subjects for his pencil among the picturesque cottages, their sturdy inhabitants, the wild cliffs, and the yellow strand glittering with shells....