Women's Wild Oats Essays on the Re-fixing of Moral Standards 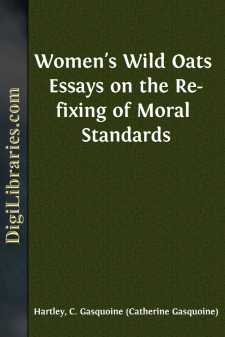 "To the hungry soul every bitter thing is sweet."—Prov. xxvii. 7.

The sudden collapse of the war left us in a daze. After the years of inhuman strain it was hard to ease off tension to the almost forgotten conditions of peace. I recall that ever to be remembered day, November 11th, 1918—Victory Day. In the early hours before noon I was in London, and my young son was with me. Everywhere was an atmosphere of anxiety, an unusual stillness. Men in little groups of two and three stood here and there, soldiers in larger numbers loitered or walked slowly along the pavements; girls and women waited at the doors of business houses and shops, where inside nobody seemed attending to the few customers. Everyone was waiting; there was an expectancy so great and so stirring that ordinary life had stopped. The last hour seemed endless in its slow passing. I do not remember ever to have experienced the same anxious tension, which was felt so strongly by us all that, in a way I cannot explain, we seemed to gain liberation from ourselves, and, losing individuality, were brought to share a universal impulse. The colossal importance of that hour made itself felt.

Then at last the peace guns sounded. We knew the armistice had been signed: Germany had accepted the terms offered by the Allies. The fear of utter misery was lifted: the war was over. The streets filled as if by magic, sellers of newspapers appeared, nobody knew from where, and were besieged. As the news spread, a delirium of enthusiasm caught the people. There never was such a day, and there never can be such a day again. From noon onwards in ever increasing numbers the streets were thronged with people. Strangers who had never set eyes on one another before rejoiced together as sisters and brothers. Heedless of rain, and mud, and slush, Londoners turned the city into a carnival of joy. Then as the hours advanced the fun grew wilder. People linked hands and danced, and—maddest of all—indulged in wild "ring of roses" around lamp-posts and in the centers of the great thoroughfares. From the Strand and into the West End and beyond was one packed concourse of people, a never-ending stream spread from pavement to pavement across the way, in processions, in pairs, in groups, in taxi-cabs, on the top of taxi-cabs, in and on and all over motor-omnibuses, hanging to the backs of cabs, on great munition lorries—everywhere clustering and hanging like swarming flies. There were soldiers, crowds of Dominion boys, young officers and privates, old men and young men from civil life, and thousands upon thousands of women and girls of every age and representative of every class.

It was the women that I noticed most: they were wilder than the men, making more noise, cheering, shouting and singing themselves hoarse, dancing and romping themselves tired. Quite undisguisedly the soldiers were led by them. It was Woman's Carnival as well as Victory Night.

It is very hard to find words to speak of what I felt....