Women Wage-Earners Their Past, Their Present, and Their Future 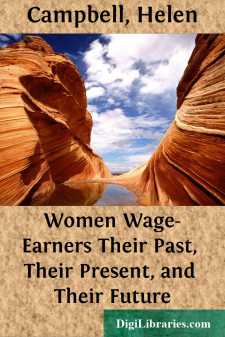 WOMEN WAGE-EARNERS; THEIR PAST, THEIR PRESENT, AND THEIR FUTURE. INTRODUCTION

The one great question that to-day agitates the whole civilized world is an economic question. It is not the production but the distribution of wealth; in other words, the wages question,—the wages of men and women. Nowhere do we find any suggestion that capital and the landlord do not receive a quid pro quo. Instead, the whole labor world cries out that the capitalist and the landlord are enslaving the rest of the world, and absorbing the lion's share of the joint production.

So long as it is a question of production only, there is perfect harmony. Both unite in agreeing that to produce as much as possible is for the interest of each. The conflict begins with distribution. It is no longer a war of one nation with another; it is internecine war, destroying the foundations of our own defences, and making enemies of those who should be brothers.

It is impossible for even the most dispassionate or indifferent observer to blink these facts. Proclaim as we may that there is no antagonism between capital and labor,—that their interests are one, and that conditions and opportunities for the worker are always better and better,—practical thinkers and workers deny this conclusion. Wealth has enormously increased, in a far greater ratio than population. Does the laborer receive his due proportion of this increase? One must unhesitatingly answer no. In a country whose life began in the search for freedom, and which professes to give equal opportunity to all, more startling inequality exists than in any other in the civilized world. One of our ablest lawyers, Thomas G. Shearman, has lately written:—

"Our old equality is gone. So far from being the most equal people on the face of the earth, as we once boasted that we were, ours is now the most unequal of civilized nations. We talk about the wealth of the British aristocracy and about the poverty of the British poor. There is not in the whole of Great Britain and Ireland so striking a contrast, so wide a chasm, between rich and poor as in these United States of America. There is no man in the whole of Great Britain and Ireland who is as wealthy as one of some half-a-dozen men who could be named in this country; and there are few there who could be poorer than some that could be found in this country. It is true that there is a larger number of the extremely poor in Great Britain and Ireland than there is in this country, but it is not true that there is any more desperate poverty in any civilized country than ours; and it is unquestionably not true that there is any greater mass of riches concentrated in a few hands in any country than this."

This for America. For England the tale is much the same. "The Bitter Cry of Outcast London," with its passionate demand that the rich open their eyes to see the misery, degradation, and want seething in London slums, is but another putting of the words of the serious, scientific observer of facts, Huxley himself, who has described an East End parish in which he spent some of his earliest years. Over that parish, he says, might have been written Dante's inscription over the entrance to the Inferno: "All hope abandon, ye who enter here." After speaking of its physical misery and its supernatural and perfectly astonishing deadness, he says that he embarked on a voyage round the world, and had the opportunity of seeing savage life in all conceivable conditions of savage degradation; and he writes:—

"I assure you I found nothing worse, nothing more degrading, nothing so hopeless, nothing nearly so intolerably dull and miserable as the life I left behind me in the East End of London. Were the alternative presented to me, I would deliberately prefer the life of the savage to that of those people in Christian London....