Women of the Romance Countries (Illustrated) Woman: In all ages and in all countries Vol. 6 (of 10) 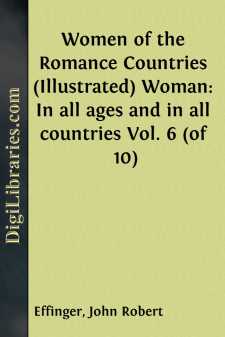 CHAPTER I THE AGE OF THE COUNTESS MATILDA OF TUSCANY

The eleventh century, which culminated in the religious fervor of the First Crusade, must not on that account be considered as an age of unexampled piety and devotion. Good men there were and true, and women of great intellectual and moral force, but it cannot be said that the time was characterized by any deep and sincere religious feeling which showed itself in the general conduct of society. Europe was just emerging from that gloom which had settled down so closely upon the older civilizations after the downfall of the glory that was Rome, and the light of the new day sifted but fitfully through the dark curtains of that restless time. Liberty had not as yet become the shibboleth of the people, superstition was in the very air, the knowledge of the wisest scholars was as naught, compared with what we know to-day; everywhere, might made right.

In a time like this, in spite of the illustrious example of the Countess Matilda, it cannot be supposed that women were in a very exalted position. It is even recorded that in several instances, men, as superior beings, debated as to whether or not women were possessed of souls. While this momentous question was never settled in a conclusive fashion, it may be remarked that in the heat of the discussion there were some who called women angels of light, while there were others who had no hesitation in declaring that they were devils incarnate, though in neither case were they willing to grant them the same rights and privileges which they themselves possessed. Though many other facts of the same kind might be adduced, the mere existence of such discussion is enough to prove to the most undiscerning that woman's place in society was not clearly recognized, and that there were many difficulties to be overcome before she could consider herself free from her primitive state of bondage.

In the eye of the feudal law, women were not considered as persons of any importance whatever. The rights of husbands were practically absolute, and led to much abuse, as they had a perfectly legal right to punish wives for their misdeeds, to control their conduct in such a way as to interfere with their personal liberty, and in general to treat them as slaves and inferior beings. The whipping-post had not then been invented as a fitting punishment for the wife beater, as it was perfectly understood, according to the feudal practices as collected by Beaumanoir, "that every husband had the right to beat his wife when she was unwilling to obey his commands, or when she cursed him, or when she gave him the lie, providing that it was done moderately, and that death did not ensue." If a wife left a husband who had beaten her, she was compelled by law to return at his first word of regret, or to lose all right to their common possessions, even for purposes of her own support.

The daughters of a feudal household had even fewer rights than the wife. All who are willing to make a candid acknowledgment of the facts must admit that even to-day, a girl-baby is often looked upon with disfavor....