Women in the Life of Balzac 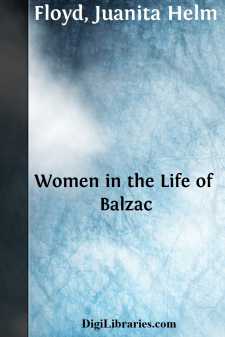 In presenting this study of Balzac's intimate relations with various women, the author regrets her inability, owing to war conditions, to consult a few books which are out of print and certain documents which have not appeared at all in print, notably the collection of the late Vicomte de Spoelberch de Lovenjoul.

The author gladly takes this opportunity of acknowledging her deep gratitude to various scholars, and wishes to express, even if inadequately, her appreciation of their inspiring contact; especially to Professor Chester Murray and Professor J. Warshaw for first interesting her in the great possibilities of a study of Balzac. To Professor Henry Alfred Todd she is grateful for his sympathetic scholarship, valuable suggestions as to matter and style, and for his careful revision of the manuscript; to Professor Gustave Lanson, for his erudition and versatile mind, which have had a great influence; to Professor F. M. Warren, for reading a part of the text and for many general ideas; to Professor Fernand Baldensperger, for reading the text and for encouragement; to Professor Gilbert Chinard, Professor Earle B. Babcock and Professor LeBraz for re-reading the text and for valuable suggestions; and to Professor John L. Gerig for his sympathetic interest, broad information, and inspiring encouragement.

To still another would she express her thanks. The Princess Radziwill has taken a great interest in this work, which deals so minutely with the life history of her aunt, and she has been most gracious in giving the author much information not to be found in books. She has made many valuable suggestions, read the entire manuscript, and approved of its presentation of the facts involved.

A quantity of books have been written about Balzac, some of which are very instructive, while others are nothing but compilations of gossip which give a totally wrong impression of the life, works and personality of the great French novelist. Having the honor of being the niece of his wife, the wonderful Etrangere, whom he married after seventeen years of an affection which contained episodes far more romantic than any of those which he has described in his many books, and having been brought up in the little house of the rue Fortunee, afterwards the rue Balzac, where they lived during their short married life, I can perhaps better appreciate than most people the value of these different books, none of which gives us an exact appreciation of the man or of the difficulties through which he had to struggle before he won at last the fame he deserved. And the conclusion to which I came, after having read them most attentively and conscientiously, was that it is often a great misfortune to possess that divine spark of genius which now and then touches the brow of a few human creatures and marks them for eternity with its fiery seal....