Women As Sex Vendors or, Why Women Are Conservative (Being a View of the Economic Status of Woman) 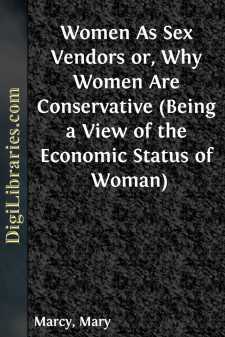 WHY WOMEN ARE CONSERVATIVE

We have often heard discussions of the reason we do not find women, as a sex, in the vanguard of world affairs; why the great educators, strong figures in progressive or revolutionary movements, are men rather than women; why these movements, themselves, are made up almost entirely of men rather than women. People have asked over and over again why, in the fields of the arts, the sciences, in the world of "practical affairs," men, rather than women, generally excel.

We believe the answer lies in the fact that women, as a sex, are the owners of a commodity vitally necessary to the health and well-being of man. Women occupy a more fortunate biologic, and in many countries, a more fortunate economic position, in the increasingly intensified struggle for existence. And the preferred class, the biologically and economically favored class, or sex, has rarely been efficient-to-do, has never been revolutionary to attack a social system that accords advantage to it.

As a sex, women have rarely been rebels or revolutionists. We do not see how they can ever be as long as there exists any system of exploitation to revolt against. Revolt comes from the submerged, never from the group occupying a favored place. Today the revolutionist is he who has nothing to sell but his labor power.

The skilled trade union group is least revolutionary among the workers. The best paid unions are not the most militant in acts calculated to improve the conditions of even their own group, and are least aggressive in conduct for improving the conditions of the whole working class. So long as they occupy a more favorable position in the industrial world, the trade unions will have something to conserve. They become conservative.

We see the small, struggling farmers, who have probably very little to lose in this world save their debts and their mortgages, counting themselves in a class of possible property owners and small exploiters, and generally throwing their support into movements promising petty reforms, when nothing but the abolition, or downfall of the system of private ownership in the means of production and distribution, can possibly help them.

The petty shop-keepers rail more against the "outrageously" high wages and the short hours of the skilled workers than against the large business organizations, like the packing interests, or the great monopolies, that hold them constantly on the edge of failure. Desperately and consistently, as they behold their competitors forced out in the irresistible march of centralization, they cling to their sinking ships, their small deceits and petty ideology in the hope of one day winning out against the terrific odds opposed to them, and landing high and dry in the capitalist class.

No shoe dealer in the darkest side street of the smallest village but hopes some day to leave his dingy shop behind and to climb into the class economically above him. He counts himself a man of business, and thinks and acts and goes down to failure, individualistically. He hates and fears his competitors, ascribes most of his wrongs to them or to the highly paid skilled workers, and apes and envies the men whom he sees rising to wealth in the economic conflict....