Women and the Alphabet A Series of Essays 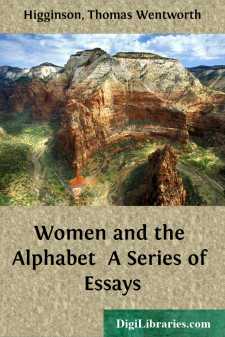 Paris smiled, for an hour or two, in the year 1801, when, amidst Napoleon's mighty projects for remodelling the religion and government of his empire, the ironical satirist, Sylvain Maréchal, thrust in his "Plan for a Law prohibiting the Alphabet to Women."[1] Daring, keen, sarcastic, learned, the little tract retains to-day so much of its pungency, that we can hardly wonder at the honest simplicity of the author's friend and biographer, Madame Gacon Dufour, who declared that he must be insane, and soberly replied to him.

His proposed statute consists of eighty-two clauses, and is fortified by a "whereas" of a hundred and thirteen weighty reasons. He exhausts the range of history to show the frightful results which have followed this taste of fruit of the tree of knowledge; quotes from the Encyclopédie, to prove that the woman who knows the alphabet has already lost a portion of her innocence; cites the opinion of Molière, that any female who has unhappily learned anything in this line should affect ignorance, when possible; asserts that knowledge rarely makes men attractive, and females never; opines that women have no occasion to peruse Ovid's "Art of Love," since they know it all in advance; remarks that three quarters of female authors are no better than they should be; maintains that Madame Guion would have been far more useful had she been merely pretty and an ignoramus, such as Nature made her,--that Ruth and Naomi could not read, and Boaz probably would never have married into the family had they possessed that accomplishment,--that the Spartan women did not know the alphabet, nor the Amazons, nor Penelope, nor Andromache, nor Lucretia, nor Joan of Arc, nor Petrarch's Laura, nor the daughters of Charlemagne, nor the three hundred and sixty-five wives of Mohammed; but that Sappho and Madame de Maintenon could read altogether too well; while the case of Saint Brigitta, who brought forth twelve children and twelve books, was clearly exceptional, and afforded no safe precedent.

It would seem that the brilliant Frenchman touched the root of the matter. Ought women to learn the alphabet? There the whole question lies. Concede this little fulcrum, and Archimedea will move the world before she has done with it: it becomes merely a question of time. Resistance must be made here or nowhere. Obsta principiis. Woman must be a subject or an equal: there is no middle ground. What if the Chinese proverb should turn out to be, after all, the summit of wisdom, "For men, to cultivate virtue is knowledge; for women, to renounce knowledge is virtue"?

No doubt, the progress of events is slow, like the working of the laws of gravitation generally. Certainly there has been but little change in the legal position of women since China was in its prime, until within the last half century. Lawyers admit that the fundamental theory of English and Oriental law is the same on this point: Man and wife are one, and that one is the husband. It is the oldest of legal traditions. When Blackstone declares that "the very being and existence of the woman is suspended during the marriage," and American Kent echoes that "her legal existence and authority are in a manner lost;" when Petersdorff asserts that "the husband has the right of imposing such corporeal restraints as he may deem necessary," and Bacon that "the husband hath, by law, power and dominion over his wife, and may keep her by force within the bounds of duty, and may beat her, but not in a violent or cruel manner;" when Mr. Justice Coleridge rules that the husband, in certain cases, "has a right to confine his wife in his own dwelling-house, and restrain her from liberty for an indefinite time," and Baron Alderson sums it all up tersely, "The wife is only the servant of her husband,"--these high authorities simply reaffirm the dogma of the Gentoo code, four thousand years old and more: "A man, both day and night, must keep his wife so much in subjection that she by no means be mistress of her own actions....