Woman's Work in the Civil War A Record of Heroism, Patriotism, and Patience 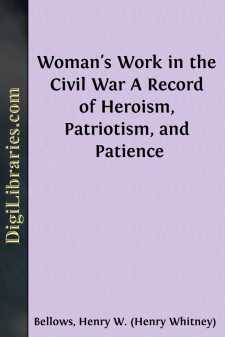 The preparation of this work, or rather the collection of material for it, was commenced in the autumn of 1863. While engaged in the compilation of a little book on "The Philanthropic Results of the War" for circulation abroad, in the summer of that year, the writer became so deeply impressed with the extraordinary sacrifices and devotion of loyal women, in the national cause, that he determined to make a record of them for the honor of his country. A voluminous correspondence then commenced and continued to the present time, soon demonstrated how general were the acts of patriotic devotion, and an extensive tour, undertaken the following summer, to obtain by personal observation and intercourse with these heroic women, a more clear and comprehensive idea of what they had done and were doing, only served to increase his admiration for their zeal, patience, and self-denying effort.

Meantime the war still continued, and the collisions between Grant and Lee, in the East, and Sherman and Johnston, in the South, the fierce campaign between Thomas and Hood in Tennessee, Sheridan's annihilating defeats of Early in the valley of the Shenandoah, and Wilson's magnificent expedition in Mississippi, Alabama, and Georgia, as well as the mixed naval and military victories at Mobile and Wilmington, were fruitful in wounds, sickness, and death. Never had the gentle and patient ministrations of woman been so needful as in the last year of the war; and never had they been so abundantly bestowed, and with such zeal and self-forgetfulness.

From Andersonville, and Millen, from Charleston, and Florence, from Salisbury, and Wilmington, from Belle Isle, and Libby Prison, came also, in these later months of the war, thousands of our bravest and noblest heroes, captured by the rebels, the feeble remnant of the tens of thousands imprisoned there, a majority of whom had perished of cold, nakedness, starvation, and disease, in those charnel houses, victims of the fiendish malignity of the rebel leaders. These poor fellows, starved to the last degree of emaciation, crippled and dying from frost and gangrene, many of them idiotic from their sufferings, or with the fierce fever of typhus, more deadly than sword or minié bullet, raging in their veins, were brought to Annapolis and to Wilmington, and unmindful of the deadly infection, gentle and tender women ministered to them as faithfully and lovingly, as if they were their own brothers. Ever and anon, in these works of mercy, one of these fair ministrants died a martyr to her faithfulness, asking, often only, to be buried beside her "boys," but the work never ceased while there was a soldier to be nursed. Nor were these the only fields in which noble service was rendered to humanity by the women of our time. In the larger associations of our cities, day after day, and year after year, women served in summer's heat and winter's cold, at their desks, corresponding with auxiliary aid societies, taking account of goods received for sanitary supplies, re-packing and shipping them to the points where they were needed, inditing and sending out circulars appealing for aid, in work more prosaic but equally needful and patriotic with that performed in the hospitals; and throughout every village and hamlet in the country, women were toiling, contriving, submitting to privation, performing unusual and severe labors, all for the soldiers. In the general hospitals of the cities and larger towns, the labors of the special diet kitchen, and of the hospital nurse were performed steadily, faithfully, and uncomplainingly, though there also, ever and anon, some fair toiler laid down her life in the service. There were many too in still other fields of labor, who showed their love for their country; the faithful women who, in the Philadelphia Refreshment Saloons, fed the hungry soldier on his way to or from the battle-field, till in the aggregate, they had dispensed nearly eight hundred thousand meals, and had cared for thousands of sick and wounded; the matrons of the Soldiers' Homes, Lodges, and Rests; the heroic souls who devoted themselves to the noble work of raising a nation of bondmen to intelligence and freedom; those who attempted the still more hopeless task of rousing the blunted intellect and cultivating the moral nature of the degraded and abject poor whites; and those who in circumstances of the greatest peril, manifested their fearless and undying attachment to their country and its flag; all these were entitled to a place in such a record. What wonder, then, that, pursuing his self-appointed task assiduously, the writer found it growing upon him; till the question came, not, who should be inscribed in this roll, but who could be omitted, since it was evident no single volume could do justice to all.

In the autumn of 1865, Mrs. Mary C. Vaughan, a skilful and practiced writer, whose tastes and sympathies led her to take an interest in the work, became associated with the writer in its preparation, and to her zeal in collecting, and skill in arranging the materials obtained, many of the interesting sketches of the volume are due....