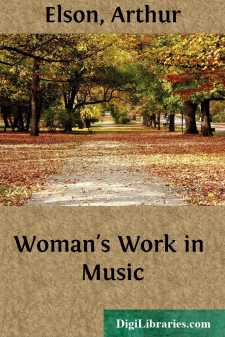 CHAPTER I. ANCIENT AND MYTHICAL

The Church of Rome, though admitting no women to a share in performing its services, has yet made a woman the patron saint of music. The religions of antiquity have paid even more homage to the weaker sex in the matter, as the multitude of musical nymphs and fostering goddesses will show.

Of Saint Cecilia herself little is known accurately. The very apocryphal legend states that about the year 230 a noble Roman lady of that name, who had been converted to Christianity, was forced into an unwilling marriage with a certain Valerian, a pagan. She succeeded in converting her husband and his brother, but all were martyred because of their faith. This it is stated, took place under the Prefect Almacus, but history gives no such name. It is unfortunate, also, that the earliest writer mentioning her, Fortunatus, Bishop of Poitiers, speaks of her as having died in Sicily between the years 176 and 180. It is doubtful whether she would have been known at all, in connection with the art, but for a passing phrase in her story, which relates that she often united instrumental music to that of her voice in sounding the praises of the Lord. Because of these few words, she is famed throughout musical Christendom, half the musical societies in Europe are named after her, and Raphael's picture, Dryden's ode, Stefano Maderno's statue, and a hundred other great art works have come into existence.

The earliest inferences of woman's influence in music are to be drawn from the Hindoo mythology. According to the tabular schedule of all knowledge, found in the ancient Brahmin records, music as an art belongs in the second chief division of lesser sciences, but on its mathematical and philosophical side it is accorded a much higher position, and is treated of in the oldest and most sacred Hindoo work, the Veda. This authority tells us that when Brahma had lain in the original egg some thousand billion years, he split it by the force of his thought, and made heaven and earth from the two fragments. After this, Manu brought into being ten great forces, whence came all the gods, goddesses, good and evil spirits. Among the lesser deities were the genii of music (Gandharbas) and those of the dance (Apsarasas), who furnished entertainment for the gods before man possessed the art.

About this time the female element began to assert itself. At Brahma's command, his consort, Sarisvati, goddess of speech and oratory, brought music to man, incidentally giving the Hindoos their finest musical instrument, the vina. The demigod Nared became the protector of the art, but Maheda Chrishna performed a more material service by allowing five keys, or modes, to spring from his head, in the shape of nymphs, while his wife, Parbuti, produced one more. Then Brahma helped the cause along by adding thirty lesser keys, or modes, all of them in the form of nymphs also.

These modes varied in character, some of them being too fiery to be attempted by mortals. It is related that Akbar, the emperor, once ordered the famous singer, Naik Gobaul, to sing the Raagni, or improvisation, of the mode of fire....