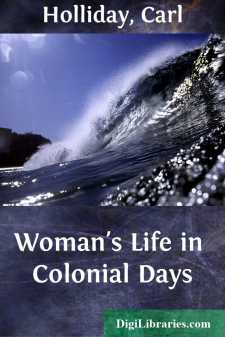 CHAPTER I COLONIAL WOMAN AND RELIGION I. The Spirit of Woman

With what a valiant and unyielding spirit our forefathers met the unspeakable hardships of the first days of American colonization! We of these softer and more abundant times can never quite comprehend what distress, what positive suffering those bold souls of the seventeenth century endured to establish a new people among the nations of the world. The very voyage from England to America might have daunted the bravest of spirits. Note but this glimpse from an account by Colonel Norwood in his Voyage to Virginia: "Women and children made dismal cries and grievous complaints. The infinite number of rats that all the voyage had been our plague, we now were glad to make our prey to feed on; and as they were insnared and taken a well grown rat was sold for sixteen shillings as a market rate. Nay, before the voyage did end (as I was credibly informed) a woman great with child offered twenty shillings for a rat, which the proprietor refusing, the woman died."

That was an era of restless, adventurous spirits—men and women filled with the rich and danger-loving blood of the Elizabethan day. We should recall that every colony of the original thirteen, except Georgia, was founded in the seventeenth century when the energy of that great and versatile period of the Virgin Queen had not yet dissipated itself. The spirit that moved Ben Jonson and Shakespeare to undertake the new and untried in literature was the same spirit that moved John Smith and his cavaliers to invade the Virginia wilderness, and the Pilgrim Fathers to found a commonwealth for freedom's sake on a stern and rock-bound coast. It was the day of Milton, Dryden, and Bunyan, the day of the Protectorate with its fanatical defenders, the day of the rise and fall of British Puritanism, the day of the Revolution of 1688 which forever doomed the theory of the divine rights of monarchs, the day of the bloody Thirty Years' War with its consequent downfall of aristocracy, the day of the Grand Monarch in France with its accumulating preparations for the destruction of kingly lights and the rise of the Commons.

In such an age we can but expect bold adventures. The discovery and exploration of the New World and the defeat of the Spanish Armada had now made England monarch of sea and land. The imagination of the people was aroused, and tales of a wealth like that of Croesus came from mariners who had sailed the seven seas, and were willingly believed by an excited audience. Indeed the nations stood ready with open-mouthed wonder to accept all stories, no matter how marvelous or preposterous. America suddenly appeared to all people as the land that offered wealth, religious and political freedom, a home for the poor, a refuge for the persecuted, in truth, a paradise for all who would begin life anew. With such a vision and with such a spirit many came. The same energy that created a Lear and a Hamlet created a Jamestown and a Plymouth. Shakespeare was at the height of his career when Jamestown was settled, and had been dead less than five years when the Puritans landed at Plymouth....