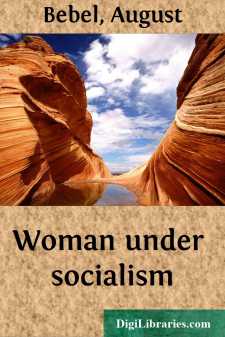 Bebel's work, "Die Frau und der Socialismus," rendered in this English version with the title "Woman under Socialism," is the best-aimed shot at the existing social system, both strategically and tactically considered. It is wise tactics and strategy to attack an enemy on his weakest side. The Woman Question is the weakest link in the capitalist mail.

The workingman, we know, is a defenceless being; but it takes much sharpening of the intellect to appreciate the fact that "he cannot speak for himself." His sex is popularly coupled with the sense of strength. The illusion conceals his feebleness, and deprives him of help, often of sympathy. It is thus even with regard to the child. Proverbially weak and needing support, the child, nevertheless, is not everywhere a victim in the existing social order. Only in remote sense does the child of the ruling class suffer. The invocation of the "Rights of the Child" leaves substantially untouched the children of the rich. It is otherwise with woman. The shot that rips up the wrongs done to her touches a nerve that aches from end to end in the capitalist world. There is no woman, whatever her station, but in one way or other is a sufferer, a victim in modern society. While upon the woman of the working class the cross of capitalist society rests heaviest in all ways, not one of her sisters in all the upper ranks but bears some share of the burden, or, to be plainer, of the smudge,—and what is more to the point, they are aware of it. Accordingly, the invocation of the "Rights of Woman" not only rouses the spirit of the heaviest sufferers under capitalist society, and thereby adds swing to the blows of the male militants in their efforts to overthrow the existing order, it also lames the adversary by raising sympathizers in his own camp, and inciting sedition among his own retinue. Bebel's exhaustive work, here put in English garb, does this double work unerringly.

I might stop here. The ethic formula commands self-effacement to a translator. More so than well-brought-up children, who should be "seen and not heard," a translator should, where at all possible, be neither seen nor heard. That, however, is not always possible. In a work of this nature, which, to the extent of this one, projects itself into hypotheses of the future, and even whose premises necessarily branch off into fields that are not essentially basic to Socialism, much that is said is, as the author himself announces in his introduction, purely the personal opinion of the writer. With these a translator, however, much in general and fundamental accord, may not always agree. Not agreeing, he is in duty bound to modify the ethic formula to the extent of marking his exception, lest the general accord, implied in the act of translating, be construed into specific approval of objected-to passages and views. Mindful of a translator's duties as well as rights, I have reduced to a small number, and entered in the shape of running footnotes to the text, the dissent I thought necessary to the passages that to me seemed most objectionable in matters not related to the main question; and, as to matters related to the main question, rather than enter dissent in running footnotes, I have reserved for this place a summary of my own private views on the family of the future.

It is an error to imagine that, in its spiral course, society ever returns to where it started from....