Woman on Her Own, False Gods and The Red Robe Three Plays By Brieux 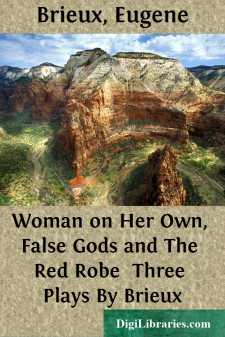 We are confronted at the present time by the woman who is anxious to lay by means for her own support irrespective of the protection of her husband. In this play I have indicated the tendency of this difficulty and the consequent troubles which the older civilizations will bring upon themselves when the woman's standing as a worker is generally acknowledged. My conclusion, namely, that all these complications and troubles are, at present at any rate, owing to the education of the man, points to the remedy, as far as I can see it.

I must inform my readers that the version of La Femme Seule, a translation of which is now published in this volume, has, so far, not appeared in France and is unknown there; at least as regards the larger part of the third act. I might, did I think it advisable, reproduce in its entirety a text which certain timidities have led me to emasculate.

As between the man and the woman the ideal situation would, no doubt, be a rehabilitation of the old custom—the man at the workshop and the woman in the home; thus reserving for her the holiest and most important of all missions—the one which insures the future of the race by her enlightened care of the moral and physical health of her children.

Unfortunately it happens that the wages of the working-man are insufficient for the support of a family, and the poor woman is therefore compelled to go to the factory. The results are deplorable. The child is either entirely abandoned, or given to the State, and the solidarity of the family suffers in consequence.

Then again a generation of women with new ideas has arisen, who think they should have, if they wish it, the right to live alone and by themselves, without a husband's protection. However much some of us may regret this attitude, it is one which must be accepted, since I cannot believe that the worst tyrants would dare to make marriage obligatory. These women have a right to live, and consequently a right to work. Also there are the widows and the abandoned women.

Women first took places which seemed best fit for them, and which the men turned over to them because the work appeared to be of a character suitable to the feminine sex. But the modern woman has had enough of the meagre salary which is to be obtained by means of needle-work, and she has invaded the shop, the office, the desks of the banks and post office. In industry also she has taken her place by the side of the working-man, who has made room for her first with ironical grace, then with grumbling, and sometimes with anger. I believe that in Europe at least this kind of difficulty will have to be faced in the future.

As to the rich woman (and in La Femme Seule I have treated this subject only slightly because it is one to which I expect to come back), they have been driven from the home where the progress of domestic science has left them very little to do. We have reached a kind of hypocritical form of State Socialism, or perhaps it would be better to say Collectivism, and this will profoundly change the moral outlook....