Woman Her Sex and Love Life 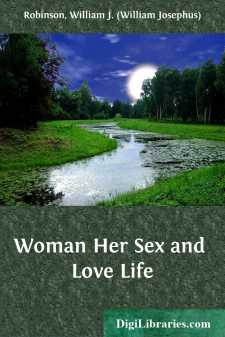 THE CREATION OF WOMAN

This old Oriental legend is so exquisitely charming, so superior to the Biblical narrative of the creation of woman, that it deserves to be reproduced in Woman: Her Sex and Love Life. There are several variants of this legend, but I reproduce it as it appeared in the first issue of The Critic and Guide, January, 1903.

At the beginning of time, Twashtri—the Vulcan of Hindu mythology—created the world. But when he wished to create a woman, he found that he had employed all his materials in the creation of man. There did not remain one solid element. Then Twashtri, perplexed, fell into a profound meditation from which he aroused himself and proceeded as follows:

He took the roundness of the moon, the undulations of the serpent, the entwinement of clinging plants, the trembling of the grass, the slenderness of the rose-vine and the velvet of the flower, the lightness of the leaf and the glance of the fawn, the gaiety of the sun's rays and tears of the mist, the inconstancy of the wind and the timidity of the hare, the vanity of the peacock and the softness of the down on the throat of the swallow, the hardness of the diamond, the sweet flavor of honey and the cruelty of the tiger, the warmth of fire, the chill of snow, the chatter of the jay and the cooing of the turtle dove.

He combined all these and formed a woman. Then he made a present of her to man. Eight days later the man came to Twashtri, and said: "My Lord, the creature you gave me poisons my existence. She chatters without rest, she takes all my time, she laments for nothing at all, and is always ill; take her back;" and Twashtri took the woman back.

But eight days later the man came again to the god and said: "My Lord, my life is very solitary since I returned this creature. I remember she danced before me, singing. I recall how she glanced at me from the corner of her eye, how she played with me, clung to me. Give her back to me," and Twashtri returned the woman to him. Three days only passed and Twashtri saw the man coming to him again. "My Lord," said he, "I do not understand exactly how it is, but I am sure that the woman causes me more annoyance than pleasure. I beg you to relieve me of her."

But Twashtri cried: "Go your way and do the best you can." And the man cried: "I cannot live with her!" "Neither can you live without her!" replied Twashtri.

And the man went away sorrowful, murmuring: "Woe is me, I can neither live with nor without her."

In the first chapter of this book I have shown, I believe convincingly, why sex knowledge is even more important for women than it is for men. I have examined carefully the books that have been written for girls and women, and I know that it is not bias, nor carping criticism, but strict honesty that forces me to say that I have not found one satisfactory girl's or woman's sex book. There are some excellent books for girls and women on general hygiene; but on sex hygiene, on the general manifestations of the sex instinct, on sex ethics—none....