Woman As She Should Be or, Agnes Wiltshire 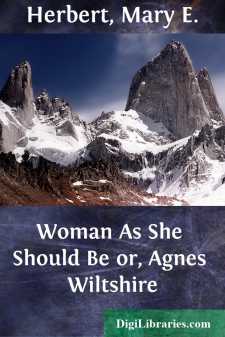 The Sabbath day was drawing to a close, as Agnes Wiltshire sat at her chamber window, absorbed in deep and painful thought. The last rays of the sun lighted up the garden overlooked by the casement,—if garden it could be called,—a spot that had once been most beautiful, when young and fair hands plucked the noxious weed, and took delight in nursing into fairest life, flowers, whose loveliness might well have vied with any; but, long since, those hands had mouldered into dust, and the spot lay neglected; yet, in spite of neglect, beautiful still. There was no enclosure to mark it from the fields beyond, that stretched, far as the eye could discern, till lost in a rich growth of woods, but a few ornamental trees and graceful shrubs, with here and there a plot, now gay, with autumn flowers, alone kept alive, in the heart of the beholder, a remembrance of its purpose. A quiet scene of rural beauty it was, and so thought the maiden, as, rousing from her reverie, she gazed on garden, fields, and distant woods, but more lovingly and lingeringly dwelt her glance on a lake that lay embosomed between the meadow and the grove, partly skirted by trees that grew even to its edge, and partly by the rich grass, whose vivid color betrayed the influence of those placid waters, that now reflected every glowing tint, and every delicate hue of the peerless sunset sky.

Quiet at all times, the stillness of the scene was now unbroken, save by the twittering of some belated swallow, the chirp of the cricket, or the evening hymn of the forest songsters, ere they sank to grateful rest. All was peace without, but troubled and anxious was the heart of the solitary occupant of that apartment, who, though for a moment aroused from deep, and, as it appeared from the expression of her countenance, painful thought, by the beauty of the landscape, again summoned her wandering thoughts, and returned to the theme which had so deeply engrossed her.

A slight tap at the door once more aroused her, and in answer to her invitation, "Walk in," a lady entered the room, and affectionately addressed the young girl.

"Forgive my intrusion, my dear Miss Wiltshire, but I feared, from your remaining so long in your room, that you were not well, and have come to ascertain whether I am correct or not."

"I am much obliged for your kindness, but I am quite well, in body, at least," was the reply, while the lips quivered, and the eyes were suffused with tears.

There was silence for a few moments between them, for Mrs. Gordon was too delicate to allude to emotions, which her companion evidently strove to conceal, and with the nature of which she was totally unacquainted. At length, however, she broke the quiet that had reigned for some moments in the apartment, by an observation on the service they had both that day attended.

"Accustomed, as you are, to city churches and city congregations, it could scarcely be expected that our unpretending house of prayer, with its humble worshippers, could have found much favor in your eyes, Miss Wiltshire?"

"And yet, strange to say," exclaimed Agnes, lifting her fine dark eyes to Mrs....