Woman and Womanhood A Search for Principles 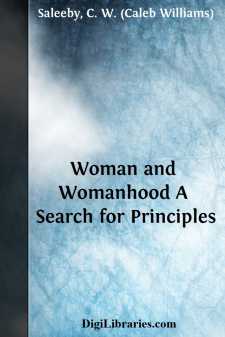 We are often and rightly reminded that woman is half the human race. It is truer even than it appears. Not only is woman half of the present generation, but present woman is half of all the generations of men and women to come. The argument of this book, which will be regarded as reactionary by many women called "advanced"—presumably as doctors say that a case of consumption is "advanced"—involves nothing other than adequate recognition of the importance of woman in the most important of all matters. It is true that my primary concern has been to furnish, for the individual woman and for those in charge of girlhood, a guide of life based upon the known physiology of sex. But it is a poor guide of life which considers only the transient individual, and poorest of all in this very case.

If it were true that woman is merely the vessel and custodian of the future lives of men and women, entrusted to her ante-natal care by their fathers, as many creeds have supposed, then indeed it would be a question of relatively small moment how the mothers of the future were chosen. Our ingenious devices for ensuring the supremacy of man lend colour to this idea. We name children after their fathers, and the fact that they are also to some extent of the maternal stock is obscured.

But when we ask to what extent they are also of maternal stock, we find that there is a rigorous equality between the sexes in this matter. It is a fact which has been ignored or inadequately recognized by every feminist and by every eugenist from Plato until the present time. Salient qualities, whether good or ill, are more commonly displayed by men than by women. Great strength or physical courage or endurance, great ability or genius, together with a variety of abnormalities, are much more commonly found in men than in women, and the eugenic emphasis has therefore always been laid upon the choice of fathers rather than of mothers. Not so long ago, the scion of a noble race must marry, not at all necessarily the daughter of another noble race, but rather any young healthy woman who promised to be able to bear children easily and suckle them long. But directly we observe, under the microscope, the facts of development, we discover that each parent contributes an exactly equal share to the making of the new individual, and all the ancient and modern ideas of the superior value of well-selected fatherhood fall to the ground. Woman is indeed half the race. In virtue of expectant motherhood and her ante-natal nurture of us all, she might well claim to be more, but she is half at least.

And thus it matters for the future at least as much how the mothers are chosen as how the fathers are. This remains true, notwithstanding that the differences between men, commending them for selection or rejection, seem so much more conspicuous and important than in the case of women.

For, in the first place, the differences between women are much greater than appear when, for instance, we read history as history is at present understood, or when we observe and compare the world and his wife....