Witness to the Deed 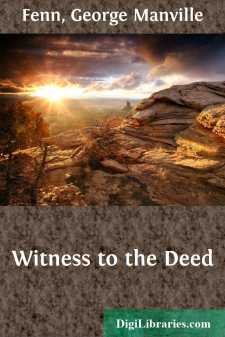 Chapter One. In Benchers’ Inn.

Malcolm Stratton, F.Z.S., naturalist, a handsome, dark-complexioned man of eight-and-twenty, started and flushed like a girl as he hurriedly thrust the photograph he had been apostrophising into his breast pocket, and ran to the deep, dingy window of his chambers to look at the clock over the old hall of Bencher’s Inn, E.C. It was an unnecessary piece of business, for there was a black marble clock on the old carved oak chimney-piece nestling among Grinling Gibbons’ wooden flowers and pippins, and he had been dragging his watch from his pocket every ten minutes since he had risen at seven, taken his bath, and dressed; but he had forgotten the hour the next minute, and gone on making his preparations, haunted by the great dread lest he should be too late.

“Quarter to ten yet,” he muttered. “How slowly the time goes!” As he spoke he sniffed slightly and smiled, for a peculiar aromatic incense-like odour had crept into the room through the chinks in a door.

He stepped back to where a new-looking portmanteau lay upon the Turkey carpet, and stood contemplating it for a few moments.

“Now, have I forgotten anything?”

This question was followed by a slow look round the quaint, handsomely furnished old oak-panelled room, one of several suites let out to bachelors who could pay well, and who affected the grim old inn with its plane trees, basin of water, and refreshing quiet, just out of the roar of the busy city street. And as Malcolm Stratton looked round his eyes rested on his cases of valuable books and busts of famous naturalists, and a couple of family portraits, both of which seemed to smile at him pleasantly; and then on and over natural history specimens, curious stuffed birds, a cabinet of osteological preparations, and over and around the heavy looking carvings and mouldings about the four doorways, and continued from the fireplace up to the low ceiling. But, look where he would, he could see nothing but a beautiful face with large, pensive eyes, gazing with loving trust in his as he had seen them only a few hours before when he had said “good-night.”

“Bah! I shall never be ready,” he cried, with an impatient laugh, and crossing to one of the doorways—all exactly alike—he disappeared for a moment or two, to return from his bedroom with a black bag, which he hastily strapped, set down, paused to think for a moment, and then taking out his keys opened the table-drawer, took out a cheque book, and sat down to write.

“May as well have enough,” he said merrily. “I’ve waited long enough for this trip, and a man does not get married every day. One—fifty. Signature. Bah! Don’t cross it, stupid!”

He tore out the cheque, threw back the book, and locked the drawer, before going to a door on the right-hand side of the fireplace, bending forward and listening.