Within The Enemy's Lines 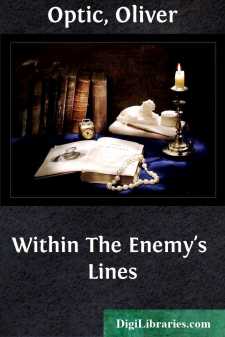 CHAPTER I AN UNEXPECTED VISITOR

"Cornelius!" exclaimed Captain Passford, as a young man of nineteen was shown into the library of the magnificent dwelling of the millionnaire at Bonnydale, on the Hudson.

"Cornelius Passford, Uncle Horatio," replied the young man, as the captain rushed to him and extended his hand.

"I think there can be no mistake about it; and I should have been no more surprised if Mr. Jefferson Davis had been ushered into my library at this moment," continued Captain Passford, still retaining the hand of his nephew. "I understood that you were a soldier in the Confederate army."

"I was a soldier; but I am not one just now," replied the visitor, with some embarrassment in his manner, though the circumstances were strange enough to account for it.

"How are your father and mother and Miss Gerty, Corny?" asked the uncle of the visitor, giving the young man the name by which he was generally called both at home and in the family of his uncle.

"They were all very well when I left them," replied Corny, looking on the floor, as though he was not altogether satisfied with himself.

"Of course, you brought letters from your father and Gerty?"

"No, sir; I brought no letters," replied Corny, and, more than before, he looked as though he was not enjoying his present visit.

"No letters!" exclaimed Captain Passford, evidently surprised beyond measure at the apparent want of kindly feeling on the part of members of his brother's family in the South.

"Not a letter, Uncle Horatio," answered Corny, bracing himself up, as though he realized that he was not presenting a demeanor such as he thought the occasion required of him.

"This is very strange," added Captain Passford, with a cloud playing on his fine features.

"It is war between the North and the South, Uncle Horatio, and I suppose my father did not feel like writing any letters. Gerty never writes any letters if she can help it," Corny explained.

"But Gerty used to write to Florry about once a week."

"Did she? I didn't know it. She never would write to me when I was away from home," said Corny, who seemed to be very anxious not to say anything that was not consistent with the present situation, whatever it was.

"When I parted with my brother on board of the Bellevite, both of us shed tears as we realized that war made enemies of us; but each of us promised to do all he could for the other in case of need. I am very sure that there was not the slightest unkind feeling between us. Of course, I did not expect him to write me the war news, but I think he could have written a few lines without any allusion to the war," said Captain Passford, pained at this want of filial affection on the part of his brother.

At that moment the bell for tea rang, and the captain invited his nephew to the table with him. The host was saddened by the absence of news from his brother, of any kindly expression from one who was of the same blood as himself. He was not quite satisfied with Corny's manner, or with the little he seemed to be willing to say about the rest of the family....