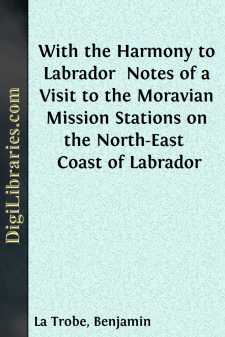 I will content myself with a few explanations of the accompanying view of the station from the bay. In winter the aspect of the whole landscape would be very much whiter, and the foreground not water, but ice. The bare, rocky ship hill which forms the background still had considerable patches of snow when we arrived early in August, but it melted from day to day during our stay, for the summer sun asserts its power during its brief sway. The mission-house in the centre of the picture is connected with the church by a covered passage, and the building with the three gable-ends, on the other side of it, is the store. The gardens, really wonderful in results when the climate is considered, are situated at some distance to the rear of the mission premises. The Eskimo village lies mostly to the right, where only one or two log huts are visible in the picture. Some of the native houses are behind the mission premises, including that of Jonas and his capable wife Lydia, perhaps the neatest and best furnished home of an Eskimo to be found in Labrador. The three windows to the right of the front door of the mission-house belong to the rooms occupied by Mr. and Mrs. Asboe. If there be as much snow this winter as last, they may be in the dark, part of the time. The three centre windows of the upper story show Mr. Hansen's rooms, and on each side of these are the dwellings of Mr. and Mrs. Kaestner and Mr. and Mrs. Lundberg.

A STROLL "TO THE HEATHEN."

The only "road" in all Labrador is the broad path at Hebron traversed by the only wheeled vehicle in the country, a queer little wagon drawn by dogs, and used to fetch water for the house. But great service to succeeding generations of missionaries has been rendered by those who have employed some of their leisure in making pleasant paths leading to points of view or places of interest. For such a remote settlement, Hopedale is rich in well-made walks, though they are by no means so extensive as the winding paths in the fir woods behind Nain, the oldest station. And as I can bear witness, the present generation of missionaries have at each station fairly done their duty in adding to the roads along which their successors in the service shall take their social strolls or their lonely prayerful walks in communion with the best of friends.

What an illustration of the spiritual service in such a land! The pioneer finds all in the roughest phase of nature. With infinite trouble and pains he prepares the way of the Lord, making the rough places plain; here he takes away the rocks and stones which bar the way, there he builds up, so making His paths straight. And where the good-work has been begun, other missionaries follow on the same lines; and so by grace it shall go forward, until the glory of the Lord shall be revealed and all flesh shall see it together.

One of the Hopedale paths leads "to the heathen," and what more interesting spot could we visit than those three mounds, which are all that remain of the former winter dwellings of the original heathen population....