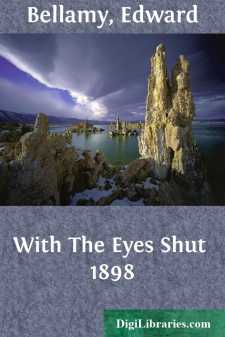 Railroad rides are naturally tiresome to persons who cannot read on the cars, and, being one of those unfortunates, I resigned myself, on taking my seat in the train, to several hours of tedium, alleviated only by such cat-naps as I might achieve. Partly on account of my infirmity, though more on account of a taste for rural quiet and retirement, my railroad journeys are few and far between. Strange as the statement may seem in days like these, it had actually been five years since I had been on an express train of a trunk line. Now, as every one knows, the improvements in the conveniences of the best equipped trains have in that period been very great, and for a considerable time I found myself amply entertained in taking note first of one ingenious device and then of another, and wondering what would come next. At the end of the first hour, however, I was pleased to find that I was growing comfortably drowsy, and proceeded to compose myself for a nap, which I hoped might last to my destination.

Presently I was touched on the shoulder, and a train boy asked me if I would not like something to read. I replied, rather petulantly, that I could not read on the cars, and only wanted to be let alone.

"Beg pardon, sir," the train boy replied, "but I 'll give you a book you can read with your eyes shut. Guess you have n't taken this line lately," he added, as I looked up offended at what seemed impertinence. "We 've been furnishing the new-fashioned phonographed books and magazines on this train for six months now, and passengers have got so they won't have anything else."

Probably this piece of information ought to have astonished me more than it did, but I had read enough about the wonders of the phonograph to be prepared in a vague sort of way for almost anything which might be related of it, and for the rest, after the air-brakes, the steam heat, the electric lights and annunciators, the vestibuled cars, and other delightful novelties I had just been admiring, almost anything seemed likely in the way of railway conveniences. Accordingly, when the boy proceeded to rattle off a list of the latest novels, I stopped him with the name of one which I had heard favorable mention of, and told him I would try that.

He was good enough to commend my choice. "That's a good one," he said. "It's all the rage. Half the train's on it this trip. Where 'll you begin?"

"Where? Why, at the beginning. Where else?" I replied.

"All right. Did n't know but you might have partly read it. Put you on at any chapter or page, you know. Put you on at first chapter with next batch in five minutes, soon as the batch that's on now gets through."

He unlocked a little box at the side of my seat, collected the price of three hours' reading at five cents an hour, and went on down the aisle. Presently I heard the tinkle of a bell from the box which he had unlocked. Following the example of others around me, I took from it a sort of two-pronged fork with the tines spread in the similitude of a chicken's wishbone. This contrivance, which was attached to the side of the car by a cord, I proceeded to apply to my ears, as I saw the others doing.

For the next three hours I scarcely altered my position, so completely was I enthralled by my novel experience. Few persons can fail to have made the observation that if the tones of the human voice did not have a charm for us in themselves apart from the ideas they convey, conversation to a great extent would soon be given up, so little is the real intellectual interest of the topics with which it is chiefly concerned. When, then, the sympathetic influence of the voice is lent to the enhancement of matter of high intrinsic interest, it is not strange that the attention should be enchained. A good story is highly entertaining even when we have to get at it by the roundabout means of spelling out the signs that stand for the words, and imagining them uttered, and then imagining what they would mean if uttered. What, then, shall be said of the delight of sitting at one's ease, with closed eyes, listening to the same story poured into one's ears in the strong, sweet, musical tones of a perfect mistress of the art of story-telling, and of the expression and excitation by means of the voice of every emotion...?