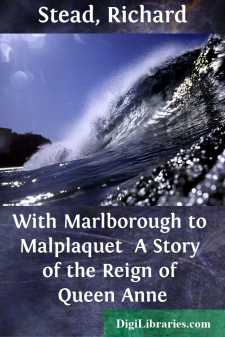 CHAPTER I A BOUT AT SINGLESTICK

"Get thee down, laddie, I tell thee."

This injunction, given for the third time, and in a broad north-country dialect, came from the guard of the York and Newcastle coach, a strange new thing in England. A wonderful vehicle the York and Newcastle coach, covering the eighty-six long miles between the two towns in the space of two-and-thirty hours, and as yet an object of delight, and almost of awe, to the rustics of the villages and small towns on that portion of the Great North Road.

It was the darkening of a stinging day in the latter part of December, in the year 1701—it wanted but forty-eight hours to Christmas Eve—when the coach pulled up at the principal inn of the then quiet little country town of Darlington, a place which roused itself from its general sleepiness only on market and fair days, or now, since the mail-coach had begun to run, on the arrival or departure of the marvellous conveyance, whose rattle over the cobble-stones drew every inhabitant of the main street to the door.

No reply coming from the boy on the roof, the guard went on, "Eh, but the lad must be frozen stark," and swinging himself up to the top of the coach, he seized the dilatory passenger by the arm, saying, "Now, my hearty, come your ways down; we gang na further to-day. Ye are as stiff as a frozen poker."

"And no wonder," came a voice from below; "'tis not a day fit for man or dog to be out a minute longer than necessary. Bring the bairn in, Charley." The invitation came from a kindly and portly dame, the hostess, who had come to the door to welcome such passengers as might be disposed to put up for the night at the inn.

He spoke in low tones and as if but half awake. He was, in fact, just dropping into a doze.

"Here, mates, catch hold," the guard cried, and without more ado the lad was lowered down to the little group of loafers who had come to see the sight and to pick up any stray penny that might be available. A minute later George Fairburn was rapidly thawing before the rousing fire in the inn's best parlour, and was gulping down the cup of hot mulled ale the good-natured landlady had put into his trembling hands.

"Go, Fairburn?" cried another boy of about his own age, who sat comfortably in the arm-chair by the cosy chimney corner. "Surely you are not going to turn out again this bitter night?"

"Indeed I am," was the somewhat ungracious reply; "my father is not a rich man, and I'm not going to put him to needless expense."

The other boy blushed, but the next moment his face resumed its usual pallor. He was tall for his fourteen years, but evidently not particularly strong. He had, in truth, somewhat of a bookish look, and his rounded shoulders already told of much poring over a student's tasks. Fairburn, on the other hand, though less tall, carried in his face and form all the evidence of robust good health....