With Axe and Rifle 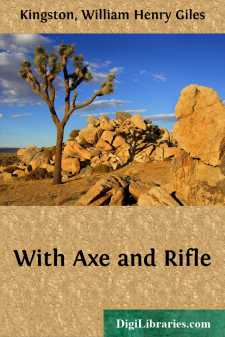 Some time after the termination of the long war which England had waged in the cause of liberty when well-nigh all the world was up in arms against her, my father, Captain Patrick Loraine, having served for many years as a subaltern, believing that he should no longer find employment for his sword, sold out of the army, and with the proceeds of his commission in his pocket, quitting the old country, came to the United States in the hopes of making his fortune more rapidly than he could expect to do at home.

Finding that as a British officer he was looked upon with distrust in the Eastern States, he made his way westward until he finally located himself in Illinois on a fertile spot, sheltered on the north by a wide extent of forest, and overlooking that part of the river Ohio which separates the state from Kentucky. I remember even now the appearance of the country. On the eastern side was a range of hills of slight elevation, on one of which our house stood, while westward stretched away as far as the eye could reach, a vast plain, with the mighty Mississippi beyond. The scenery could boast of no great beauty except such as lofty trees, the prairie, with its varied tints of green and brown, yellow cornfields, rich meadows in the valleys, and the shining river in the distance, canopied by the blue vault of heaven, could give it. Still, it was my home, and as such I should have loved it, had it possessed even less pretensions to beauty.

So well satisfied was my father with the country that he returned to Ireland to bring back a young lady who had promised to become his wife. Two or three years afterwards I was born, and was succeeded by my brother Dan, and finally by my dear little sister Kathleen. My mother, whose maiden name was O’Dwyer, was, I should have said, accompanied by her two brothers, Michael and Denis, who came out with the intention of assisting my father, and ultimately settling near him, but they were hot-headed young men, and before even they reached the farm they had a quarrel which resulted in their separation. Denis finally settled in Kentucky, while Michael, with a rifle on his shoulder and axe in his belt, saying that he should turn trapper, pushed away further west, and from that day to the time I am about to describe we had received no tidings from him. Uncle Denis became a successful settler. He was soon reconciled to my father, and occasionally paid us a visit, but preferred remaining in the location he had chosen to coming near us, as he had originally intended. He had remained a bachelor, not a very usual state of life for an Irishman; but, somehow or other he had not met the girl he “wished to marry,” as he used to say. He was, notwithstanding, a merry, good-natured, kind-hearted man, and I remember that we always enjoyed his brief visits whenever he rode over on his fast-trotting cob to see us. Uncle Denis had not come for some time, when my father received a message from a doctor who was attending him, stating that if his sister wished to see him alive, she must come over immediately....