Wit Without Money The Works of Francis Beaumont and John Fletcher 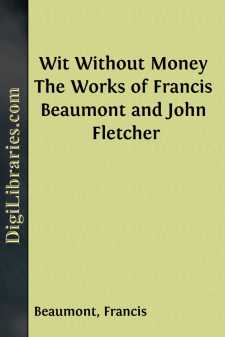 Add to My Favorites
Published: 10 years ago
Downloads: 93
Rating: (0 Votes)

Merc. When saw you Valentine?

Uncle. Not since the Horse-race, he's taken up with those that woo the Widow.

Mer. How can he live by snatches from such people? he bore a worthy mind.

Uncle. Alas, he's sunk, his means are gone, he wants, and which is worse,Takes a delight in doing so.

Unc. Runs Lunatick, if you but talk of states, he cannot be brought (now he has spent his own) to think there's inheritance, or means, but all a common riches, all men bound to be his Bailiffs.

Mer. This is something dangerous.

Uncle. No Gentleman that has estate to use it in keeping house, or followers, for those wayes he cries against, for Eating sins, dull Surfeits, cramming of Serving-men, mustering of Beggars, maintaining Hospitals for Kites, and Curs, grounding their fat faiths upon old Country proverbs, God bless the Founders; these he would have ventured into more manly uses, Wit, and carriage, and never thinks of state, or means, the ground-works: holding it monstrous, men should feed their bodies, and starve their understandings.

Uncle. Yes, if he could stay there.

Mer. Why let him marry, and that way rise again.

Uncle. It's most impossible, he will not look with any handsomeness upon a Woman.

Mer. Is he so strange to Women?

Uncle. I know not what it is, a foolish glory he has got, I know not where, to balk those benefits, and yet he will converse and flatter 'em, make 'em, or fair, or foul, rugged, or smooth, as his impression serves, for he affirms, they are only lumps, and undigested pieces, lickt over to a form by our affections, and then they show. The Lovers let 'em pass.

Mer. He might be one, he carries as much promise; they are wondrous merry.

Fount. Is Valentine come to Town?

Fount. We miss him monstrously in our directions, for this Widow is as stately, and as crafty, and stands I warrant you—

Hair. Let her stand sure, she falls before us else, come let's go seek Valentine.

Mer. This Widow seems a Gallant.

Uncle. A goodly Woman, and to her handsomness she bears her state, reserved, and great Fortune has made her Mistress of a full means, and well she knows to use it.

M[e]r. I would Valentine had her.

Uncle. There's no hope of that, Sir.

Mer. O' that condition, he had his Mortgage in again.

Uncle. I would he had.

Mer. Seek means, and see what I'le do, however let the Money be paid in, I never sought a Gentlemans undoing, nor eat the bread of other mens vexations, you told me of another Brother.

Uncle. Yes Sir, more miserable than he, for he has eat him, and drunk him up, a handsome Gentleman, and fine Scholar.

Mer. What are these?

Unc. The Tenants, they'll do what they can.

Mer. It is well prepared, be earnest, honest friends, and loud upon him, he is deaf to his own good.

Lance. We mean to tell him part of our minds an't please you.

Mer. Do, and do it home, and in what my care may help, or my perswasions when we meet next....