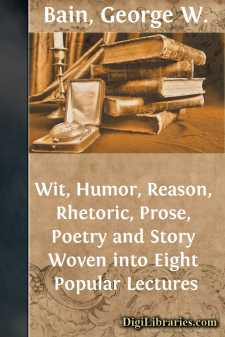 I AMONG THE MASSES, OR TRAITS OF CHARACTER.

Whatever criticism I choose to make on human character, I hope to soften the criticism with the "milk of human kindness." As rude rough rocks on mountain peaks wear button-hole bouquets so there are intervening traits in the rudest human character, which, if the clouds could only part, would show out in redeeming beauty.

To begin with, I believe prejudice to be one of the most unreasonable traits in character. It is said: "One of the most difficult things in science is to invent a lense that will not distort the object it reflects; the least deviation in the lines of the mirror will destroy the beauty of a star." How unreliable then must be the distorting lense of human prejudice.

I had a bit of experience during the Civil War which gave me something of that whole-heartedness necessary to the service of my kind. In the twilight of a summer evening, making a sharp curve in a road, about a dozen men confronted me. They were dressed in blue, a color I was not very partial to at that time. I had read that "he that fights and runs away may live to fight another day." It occurred to me that he who would run without fighting might have a still better chance, but the click of gun locks and an order to surrender changed my mind to "safety first" and I was a prisoner of the blue-coated cavalry.

The commanding officer who had me in charge (during my visit) was a Kentucky Colonel. He afterward became a major-general. I looked at him during the remainder of the war from the narrow standpoint of prejudice and cherished revenge in my heart for his having exposed me to the flying bullets of the Confederate pickets, a peril he was not responsible for and of which he knew nothing until I informed him in after years.

A few years after the war our barks met upon the same wave of life's ocean. We became engaged in the same work of reform, I as an advocate of temperance, he as candidate for the presidency of the United States on the prohibition ticket. From the warmth of friendship, my prejudice melted like mist before the morning sun and I found in General Green Clay Smith a combination of the noblest traits in human character.

Whoever would graduate in the highest franchise of being, and realize the royalty that comes of partnership with sovereignty, must have respectfulness of bearing and feeling toward those from whom they differ. We are greatly creatures of education and environment anyway, and until we can unlock the alphabet of a life and sum up the mingling, blending, reciprocal forces that have been playing upon that life, we have no more right to abuse persons for honest convictions than we have to blame them for their parentage.

You do not know the forces that have given direction to the lives of others; if so, you might know why one is a member of this or that church, this or that political party, why one lives north, another south, one on the land, another on the sea.

Some of you may differ with me, but I believe if General Grant had been born in the South, reared and educated in the South, his father had owned a cotton plantation and many slaves, General Grant would have been a Confederate General in the Civil War; while Robert E....