Wit and Wisdom of Don Quixote 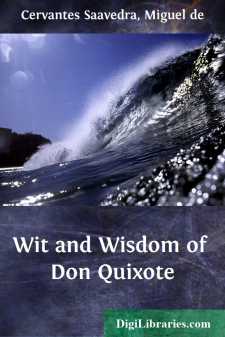 The most trivial act of the daily life of some men has a unique interest, independent of idle curiosity, which dissatisfies us with the meagre food of date, place, and pedigree. So in the "Cartas de Indias" was published, two years ago, in Spain, a facsimile letter from Cervantes when tax-gatherer to Philip II., informing him of the efforts he had made to collect the taxes in certain Andalusian villages.

It is difficult, from the slight social record that we have of Cervantes, to draw the line where imagination begins and facts end.

Miguel de Cervantes Saavedra, the contemporary of Shakspeare, Galileo, Camoens, Rubens, Tasso, and Lope de Vega, was born obscurely and in poverty, but with good antecedents. His grandfather, Juan de Cervantes, was the corregidor, or mayor, of Ossuna, and our poet was the youngest son of Rodrigo and Leonora de Cortiños, of the Barajas family. On either side he belonged to illustrious houses. He speaks of his birthplace as the "famous Henares,"—"Alcala de Henares," sometimes called Alcala de San Justo, from the saint San Justo having there suffered martyrdom under the traitor Daciamos. The town is beautifully situated on the borders of the Henares River, two thousand feet above the level of the sea.

He was born on Sunday, October 9, 1547, and was baptized in the church of Santa Maria la Mayor, receiving his name on the fête day of his patron Saint Miguel, which some biographers have confounded with that of his birthday.

We may be forgiven for a few words about Alcala de Henares, since, had it only produced so rare a man as was Cervantes, it would have had sufficient distinction; but it was a town of an eventful historical record. It was destroyed about the year 1000, and rebuilt and possessed by the Moors, was afterwards conquered by Bernardo, Archbishop of Toledo. Three hundred years later it was the favorite retreat of Ximenes, then Cardinal Archbishop of Toledo, who returned to it, after his splendid conquests, laden with gold and silver spoil taken from the mosques of Oran, and with a far richer treasure of precious Arabian manuscripts, intended for such a university as had long been his ambition to create, and the corner-stone of which he laid with his own hands in 1500. There was a very solemn ceremonial at the founding of this famous university, and a hiding away of coins and inscriptions under its massive walls, and a pious invocation to Heaven for a special blessing on the archbishop's design! At the end of eight years the extensive and splendid buildings were finished and the whole town improved. With the quickening of literary labor and the increase of opportunities of acquiring knowledge, the reputation of the university was of the highest.

The cardinal's comprehensive mind included in its professorships all that he considered useful in the arts. Emulation was encouraged, and every effort was made to draw talent from obscurity. To this enlightened ecclesiastic is the world indebted for the undertaking of the Polyglot Bible, which, in connection with other learned works, led the university to be spoken of as one of the greatest educational establishments in the world....