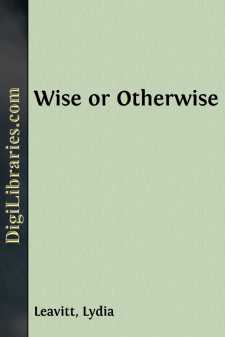 "Lead, kindly light," The words are lightly spoken by the young, who tread life's pathway with nimble feet, whose eager hands are outstretched to gather life's roses, regardless of thorns, whose voice is rippling with laughter and mirth, with blood coursing through the veins and bright eyes looking fearlessly into the future; the words have merely a joyous, musical ring. "Lead, kindly light."

"Lead, kindly light." The sunken eyes are closed in death, the tired hands are folded, the heart has ceased to beat, the mute lips are stilled, the weary feet are at rest, a look of ineffable peace rests upon the still face, while all the air is filled with sweet music and the murmur of gentle voices pleading, "Lead, kindly light."

In one of the German forests the stood a tree, which could not be classified by any of the learned scientists. It was not more beautiful than many others, but there were distinctive peculiarities which no other tree possessed. Her dress was of a sadder hue than that of her companions, and the birds refused to build their nests in her branches. She was unable to understand the language of her brothers and sisters and so stood alone and unheeded in the dense forest. One morning she awakened and found standing by her side a companion tree, odd, like herself, and she said in her heart:—"I shall be no longer alone. He will understand my language and we shall hold sweet converse." But he, in his heart, was saying—"What strange tree is this? We two are unlike all our companions. I like it not." But she did not hear the murmur of discontent, and her heart grew glad within her at the great joy that had come to her and she said in her heart:—"I will cause him to forget that we are unlike our companions; I will sing to him my softest songs and gradually her dress of sombre green assumed a brighter hue, young buds sprang forth, her branches waved softly in the breeze and she wooed the birds by gentle voice to build their nests in her arms, and,

"In foul weather and in fair,Day by day in vaster numbers,Flocked the poets of the air."

So the summer passed and her heart grew sad, for she saw the discontent of her companion, but she said to herself, "When the winter comes I will shelter him from the blasts," but he said complainingly, "I would I were like the other trees; I would like my garments to be as those I see around me. I would my limbs were as those of my companions all through the forest." And she heard, and said to herself, "I will make his garments of brilliant green." So she sent from her own roots and branches the sap—her life blood—to enrich the roots and beautify the dress of her companion. When the cold blast of winter swept through the forest she sheltered him with her long limbs, when the snow fell she covered his head with her branches and caught the weight of snow in her own arms; so all through the long winter she sheltered him from the blasts and the weight of snow bore heavily on her branches and at times they grew weary almost to breaking but her great heart never faltered.

So the spring came and day by day she sent from her own store of life-blood to enrich that of her companion and soon his garments assumed the most brilliant hues of all the trees in the forest; the leaves glinted and glistened in the sunlight, and from the branches there was ever a low murmur of song; the birds came to build their nests and rear their young in his arms; and over all there floated a delicate perfume born of the love which she had breathed over him all the long winter....