Wisdom, Wit, and Pathos of Ouida Selected from the Works of Ouida 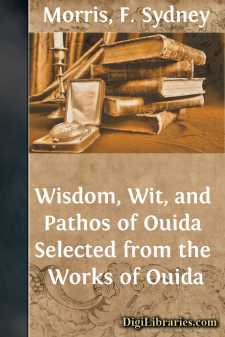 One grows to love the Roman fountains as sea-born men the sea. Go where you will there is the water; whether it foams by Trevi, where the green moss grows in it like ocean weed about the feet of the ocean god, or whether it rushes reddened by the evening light, from the mouth of an old lion that once saw Cleopatra; whether it leaps high in air, trying to reach the gold cross on St. Peter's or pours its triple cascade over the Pauline granite; whether it spouts out of a great barrel in a wall in old Trastevere, or throws up into the air a gossamer as fine as Arachne's web in a green garden way where the lizards run, or in a crowded corner where the fruit-sellers sit against the wall;—in all its shapes one grows to love the water that fills Rome with an unchanging melody all through the year.

And indeed I do believe all things and all traditions. History is like that old stag that Charles of France found out hunting in the woods once, with the bronze collar round its neck on which was written, "Cæsar mihi hoc donavit." How one's fancy loves to linger about that old stag, and what a crowd of mighty shades come thronging at the very thought of him! How wonderful it is to think of—that quiet grey beast leading his lovely life under the shadows of the woods, with his hinds and their fawns about him, whilst Cæsar after Cæsar fell and generation on generation passed away and perished! But the sciolist taps you on the arm. "Deer average fifty years of life; it was some mere court trick of course—how easy to have such a collar made!" Well, what have we gained? The stag was better than the sciolist.

Life costs but little on these sunny, silent shores; four walls of loose stones, a roof of furze and brambles, a fare of fish and fruit and millet-bread, a fire of driftwood easily gathered—and all is told. For a feast pluck the violet cactus; for a holiday push the old red boat to sea, and set the brown sail square against the sun—nothing can be cheaper, perhaps few things can be better.

To feel the western breezes blow over that sapphire sea, laden with the fragrance of a score of blossoming isles. To lie under the hollow rocks, where centuries before the fisher folk put up that painted tablet to the dear Madonna, for all poor shipwrecked souls. To climb the high hills through the tangle of myrtle and tamarisk, and the tufted rosemary, with the kids bleating above upon some unseen height. To watch the soft night close in, and the warning lights shine out over shoals and sunken rocks, and the moon hang low and golden in the blue dusk at the end there under the arch of the boughs. To spend long hours in the cool, fresh, break of day, drifting with the tide, and leaping with bare free limbs into the waves, and lying outstretched upon them, glancing down to the depths below, where silvery fish are gliding and coral branches are growing, and pink shells are floating like rose-leaves, five fathoms low and more. Oh! a good life, and none better, abroad in the winds and weather, as Nature meant that every living thing should be, only, alas, the devil put it into the mind of man to build cities!...